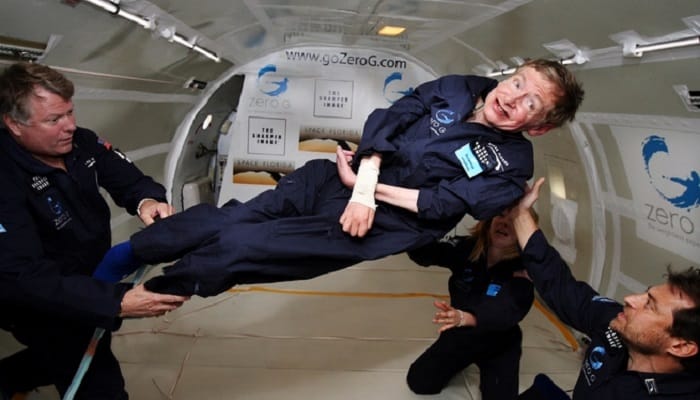 The late Stephen Hawking may have been one of the greatest minds to have ever lived, but he was also one hell of a celebrity. As well as getting his own movie The Theory of Everything, Hawking made cameos in The Simpsons, The Big Bang Theory, and Star Trek: The Next Generation, with few scientists have managed to master both the worlds of physics and pop culture like Hawking.

Well, fans can now get their hands on their own piece of Hawking memorabilia, thanks to an auction of his most significant possessions next week. Items going under the hammer include his first wheelchair, a copy of his PHD thesis, and the script from his visit to Springfield.

The online auction is being held by Christies, and will include 22 items in total, with the profits going towards the Stephen Hawking Foundation and the Motor Neurone Disease Association. The PHD thesis in particular is expecting to fetch a large sum. Titled ‘Properties of Expanding Universes,’ which Hawking wrote in 1965 while at Cambridge University, is estimated to go for £150,000. While the wheelchair is predicted to sell for between £10,000 and £15,000.

There is also a thumb-printed signed copy of the Brief History Time, which should go for approximately £3000.

The theoretical physicist, cosmologist, and writer died earlier this year at the age of 76. Hawking was diagnosed with amyotrophic lateral sclerosis, a rare form of motor neurone disease in 1963, with doctors expecting him to not live past his 20s. However, he survived for another 50 years, going on to have an iconic career despite his condition.

Speaking of the upcoming auction, titled On The Shoulders of Giants, Hawking’s daughter Lucy said: “We are giving admirers of his work the chance to acquire a memento of our father’s extraordinary life in the shape of a small selection of evocative and fascinating items.”

Questions For Stephen Hawking’s First AMA Are Pouring In

Israel’s Iron Dome has protected the country against missile attacks for years. The Iron Dome in Israel is the biggest of its kind in the world. No other countries in the world use the same air defense system, meaning it is one of a kind. The tension between Israel and Gaza has been going on… END_OF_DOCUMENT_TOKEN_TO_BE_REPLACED

The world is devastated by the news that Britain’s Prince Philip, the Duke of Edinburgh, has died at the age of 99. Palace media confirms that the Duke has expired mid-day today, April 9th. The announcement did not contain any specifics on the cause of death. The United Kingdom will enter a state of national… END_OF_DOCUMENT_TOKEN_TO_BE_REPLACED

Who would have known that religious prophets would be among the most loyal supporters of former President Trump? In fact, it has been observed that the most conservative Christians may have been the right amount of push for Trump’s presidential win back in 2016. Since Trump’s election back in 2016, numerous self-proclaimed “prophets” have been… END_OF_DOCUMENT_TOKEN_TO_BE_REPLACED