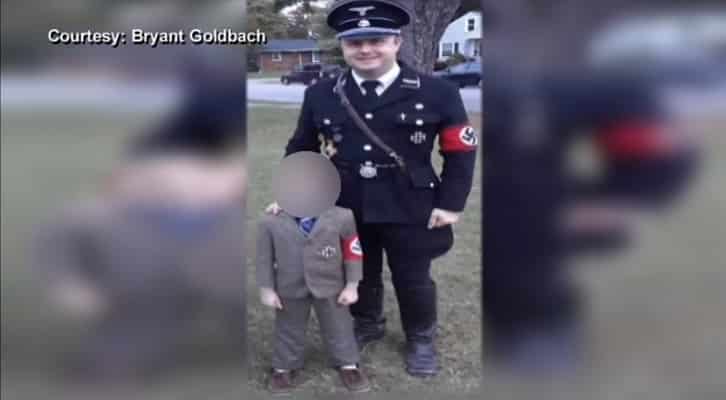 It’s that time of the year again when adults get to scare one another without any legal repercussions and kids have the right to demand candy from them. Needless to say, there will also be some creative costumes, enough to make the streets look like a Comic-Con runway. However, one man from Kentucky took things a little too far when he dressed up himself and his son with a Nazi costume.

Bryant Goldbach of Owensboro, Kentucky probably did not mean any harm when he decided to have a grand father-son Halloween moment with a Nazi costume. Bryant dressed himself up with the iconic black Nazi SS Gestapo officer uniform while he dressed up his unlucky son with the more iconic Hitler-in-uniform costume, complete with the ‘stache. The father did admit that he did not think the costume through.

“Anyone who knows us knows that we love history and often dress the part of historical figures,” says Bryant on social media. There, Bryant and his son got lambasted for their costume. Something that the father did not expect. It even got took a turn for the worst when grown adults threatened Bryant’s young son, with some saying they are going to rip the costume from the boy and scream at him.

Of course, the costume was in bad taste, so Bryant apologized despite the online threats made to his son. Still, Bryant did not realize how much controversy the Nazi costume would stir. A Rabbi named Gary Mazo, however, weighed in on the matter and acknowledged the importance of Bryant’s apology and for future reference, gave a tip, “A good rule of thumb would be: ‘if your costume calls to mind an event where millions were killed, choose another costume’.”

Ignorant Teens Cause Outrage After Conducting Nazi Salutes at Auschwitz

Just this week, lawmakers approved a bill establishing the District of Columbia (D.C.) as the 51st state of the United States of America. This is after multiple calls and protests from the citizens to finally consider D.C. as a state.  However, the bill is not out of the woods yet as it faces multiple oppositions… END_OF_DOCUMENT_TOKEN_TO_BE_REPLACED

John Bolton’s new book entitled ‘The Room Where it Happened’ had been stirring up quite the attention since it was announced for release last week. Officially released only June 23, the new book seems to threaten the Trump administration as there had been moves to get it unpublished. The request was later on turned down… END_OF_DOCUMENT_TOKEN_TO_BE_REPLACED

Learning about the Juneteenth Holiday The Juneteenth holiday, celebrated every 19th of June, is a commemoration of the liberation of enslaved African-Americans in the United States. It was on the 19th of June 1865 when Union Army General Gordon Granger announced General Order No. 3 in Galveston, Texas officially emancipating slaves in the entire state.… END_OF_DOCUMENT_TOKEN_TO_BE_REPLACED