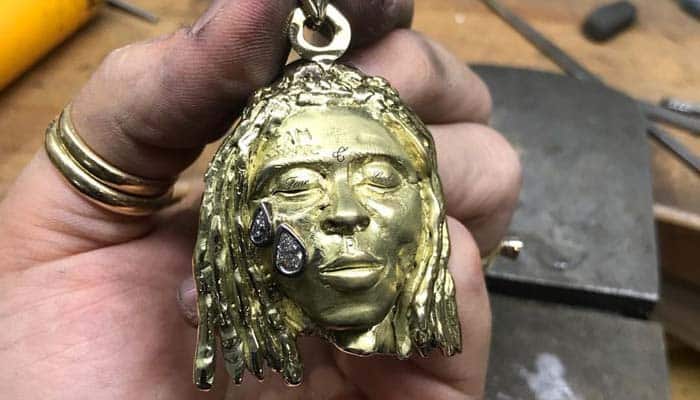 Lil Wayne debuted the video for his new single ‘Uproar’ this week, but fans were just as fascinated by his latest fashion accessory as the music.

The rapper showcased the custom pendant, which just happens to be a solid gold replica of his own head, in the video on Monday. The piece was commissioned by one of Lil Wayne’s friends to celebrate his 36th birthday and the release of his album Carter V, and is crafted from 18ct yellow gold and set with white diamonds.

Still, the story behind the necklace is almost as interesting as the jewellery itself. The portrait was hand-carved by student Joy BC, who attends London’s prestigious Royal College of Art. But despite her obvious talent, BC was about the drop out of art school as she couldn’t afford the fees – that was until this commission came along.

She said: “This year I was seriously considering dropping out of school because I couldn’t afford the fees.

‘An Icon’: Bespoke Hand carved Portrait of Lil Wayne in solid 18ct yellow gold with white gold set diamond tears. Joy BC 2018. One of a kind piece commissioned to mark Wayne’s birthday and release of Tha Carter V. Such an honour to make this piece for the one and only @liltunechi What’s more, is that this commissioned piece meant I could stay in school. Forever greatful. ‘Can’t control the tears: let them drop and roll. DONT CRY FOR ME: (those are tears of joy)’ 👁 👁 #precioustears #dontcry it’s the 💎 #carterV #lilwayne #tearsofjoy 💎#uproar #gold #diamond #tears #tearsofjoy #bespoke #portrait . Photo by @pictureriley . .

“The commission came a few weeks before I was due to start my second year, and meant that I could pay for school and continue to pursue the career I am so dedicated to.”

Entitled An Icon, the pendant is so intricate, it even includes the rapper’s face tattoos. The design draws on BC’s interest with antiques and classical artefacts, as shown by the creation’s rugged edges. However, the wearable artwork also ties in with BC’s line Precious Tears, a series of portraits featuring precious stones that rebel against the stigma of men showing their emotions.

“There is a negative stereotype that for a man to cry shows weakness – I seek to reclaim the power that can be harnessed in the simple and often moving act of shedding a tear,” she explained.
Check out more of her amazing designs on Instagram.

Kanye and Trump Together Are What We Deserve as A Culture