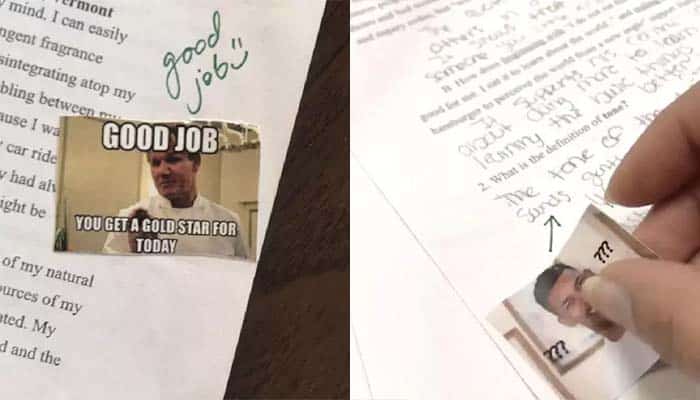 Remember how good it felt when you got stickers on your homework in elementary school? Whether it was a gold star or puns on your notebook ala Unbreakable Kimmy Schmidt (“ewe rock!), there was nothing more motivating than a sticker.

Still, once you’ve reached high school, the appeal of stickers have worn off a bit, and it takes more than a yellow smiley face to make you feel good about yourself. That’s unless of course, your sticker is a meme.

Ainee Fatima, a high school English and Media studies teacher from Chicago, has been using memes to grade her students’ work, specifically the Gordon Ramsay and confused Nick Young memes. The hilarious idea came to the 27-year-old educator while she was grading papers, and unsurprisingly, the internet loves it as much as her class does.

I love grading with my new stickers! pic.twitter.com/4K66qQblSJ

Fatima told Buzzfeed: “I was just grading and I was really frustrated, and in my head I was just like, I wish my kids could see my face right now, because the answers they were writing were just incredibly wrong.

“So I was like, let’s print out some memes.”

Using a regular printer and sticker sheets, she set to work on her hilarious new marking aides.

“They love memes — they try to bring them up in class any way they can,” she explained.

“I handed them back to the kids and immediately they were just laughing everywhere. It took a good couple of minutes to calm them down.”

The students who didn’t get stickers on their work were disappointed, but if you ask us, it seems like the perfect motivation to try harder next time. After all, who doesn’t need more Gordan Ramsay in their life?

Don’t worry, I did positive memes too! ? pic.twitter.com/rTfHCGKQwJ

And Fatima seems to agree, adding: “Students who normally wouldn’t care actually asked if they could correct their tests for a better grade and had a good laugh esp bc they always show me memes.”

And after sharing her meme stickers on Twitter, they became an online sensation, meaning Fatima also had the chance to give her class a lesson in going viral.

Nah but for real @axfxq, this is an amazing idea. We need more teachers like you who make education fun for kids.

This is such a brilliant idea. Cc @bookwyrmdancer

Hahaha this is pretty funny!! My high school siblings speak in memes. I totally get this ?

If my teachers were as creative as you are I would never hate school ever. ♡ T-T. I’m happy that at least I have a connection with you here.

“It was a super teaching moment,” she said.

“I just wanna clarify, I teach high school seniors. I would not do this with younger students. This is the culture in my class we’ve built and bc of that, they loved it.”

If only every teacher could be this cool!

Let’s Arm Teachers With Pillows and Puppies, Not Handguns And Rifles