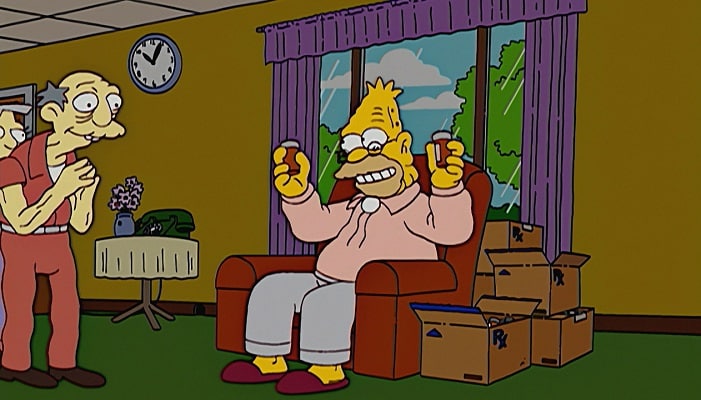 In the digital age, The Simpsons is almost as famous for predicting the future as for its satirical take on American family life. In its 28-year run, The Simpsons has accurately foreseen Donald Trump’s presidency, faulty voting machines, the horse meat scandal, and the Siegfried and Roy tiger attack. And now they’ve done it again!

They end up in Manitoba, Ontario, where they meet a man who is basically Canadian Flanders. The pair spark up an extremely meta conversation, but original Flanders is horrified when his neighbourino to the North lights up a doobie, despite Ned 2.0 claiming “its legal here.”

When the episode aired 13 years ago, marijuana wasn’t legal in Canada, but on Wednesday that all changed. However, there are still provisions on the drug, such as not smoking while driving (which just seems like common-sense if you ask us).

This is the second time in 2018 The Simpsons has been accused of predicting the future. During the FIFA World Cup in June, fans unearthed the season 9 episode ‘The Cartridge Family,’ in which the Simpsons attend a final match between Mexico and Portugal. Although the tournament wasn’t called by name in the episode, for roughly 24 hours viewers were certain that the show had predicted the World Cup finale. That was until Portugal was knocked out before the quarter finals, with the actual final between France and Croatia.

No, The Simpsons Did Not Predict Facebook’s Oculus Purchase (But The Oatmeal Did)