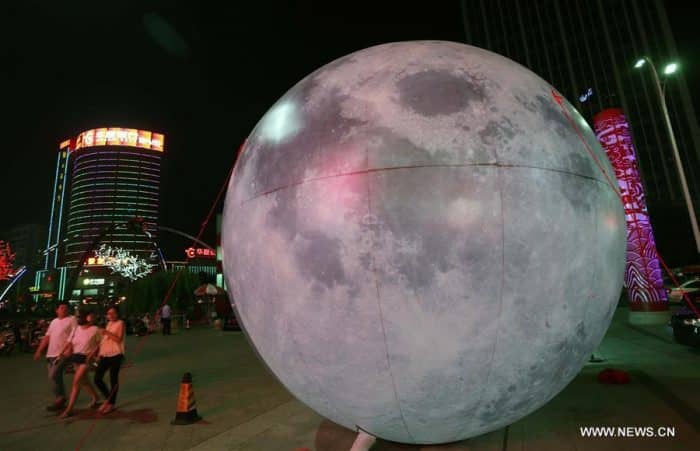 It is generally believed that while God made man, everything else was made in China. China is often known as the factory powerhouse of the world and is responsible for a lot of products, even from U.S. brands. Hence the product tag “made in China” as seen in our plastics, clothing, electronics, and lots of other things. So it should not be too surprising anymore that China wants its own artificial moon.

Instead of shooting for the stars, China wants the moon first, their own moon, which can be bright enough to replace city streets. Quite a monumental project, but the Asian economic and workforce powerhouse plans to achieve this by the year 2020. It is worth noting that their artificial moon is only for one city, which is Chengdu and not the whole country, much less the whole world.

Still, the said the artificial moon is quite impressive as it is planned to be eight times brighter than the real moon. It’s not exactly a “moon” per se, but rather a satellite shaped like it and does the same purpose, perhaps. If the project is deemed to be successful, China plans to send two more of its artificial moon units in the course of the next four years.

Much like our own natural moon, China’s artificial moon is reflective and is made out of a mirror-like material that will reflect light. It will then be made to orbit the Earth at a height of 500 kilometers and light up an area with a diameter of 10 to 80 kilometers. As for why, well, it seems China wants to significantly reduce infrastructural electricity consumption as that costs them as much as 1.2 billion yuan ($240 million) each year. So no, they’re not doing it just because someone there asked for the moon.

Phallic Skyscraper In China Gets Erected; Mocked Online For Its Shape

Presidential pardons are one and many in the history of the US. There are many times when US Presidents granted reprieves for their citizen’s misdeeds. The US President may grant a pardon for any individual, including himself, for any crimes done against the country and its citizens. This issue of Presidential pardons has been trending… END_OF_DOCUMENT_TOKEN_TO_BE_REPLACED

President Biden has tapped Rachel Levine to be his assistant secretary of health, making her the first publicly transgender federal official. In 2017, Democratic Gov. Tom Wolf appointed Levine to her current post, making her one of the few transgender persons serving in appointed or elected positions countrywide. Biden said in a statement: “Dr. Rachel… END_OF_DOCUMENT_TOKEN_TO_BE_REPLACED

The minimum wage hike has always been an issue in the US for the past decades. With only a few hours before Biden gets inaugurated as the President of the United States, people are excited for all his promises to take place. One of these is his plans to raise the minimum wage of workers… END_OF_DOCUMENT_TOKEN_TO_BE_REPLACED