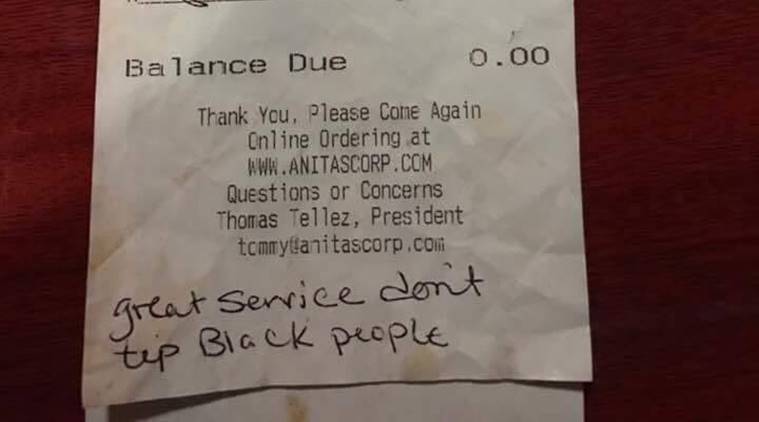 When you work as a waiter in the United States, your salary can sometimes be unstable. Even though they do receive hourly pay, it’s far lower than what minimum wage is these days. This forces those who work in the restaurant industry to rely heavily on their tips. So, when a patron decides not to tip their waiter for any reason, they’re taking money away that they rely on. That doesn’t seem to stop people though, and they even leave some incredibly cruel notes behind explaining why they’re not leaving a tip. Surprise, surprise. Most of their reasons are racially motivated. Here a list of waiters who were screwed out of a tip just for being black.

Just last month 26-year-old Jasmine Brewer was left with a cruel, racist note in place of her tip. While working at the Applebee’s in Radcliff, Kentucky, Brewer noticed something off about the family of four she was serving that day. “As I was talking to them, they barely said anything to me,” she said in an interview with WDRB. They didn’t want to tell me their drinks. They didn’t want to tell me their food. One person ordered for the whole table.” It wasn’t until after the family had left that Brewer found a napkin in the checkbook with “We don’t tip black people” scribbled on it. While Brewer was too embarrassed to tell anyone, she was understandably upset and sent a photo to her mother. Her mother ended up sharing the picture on Facebook, where it went viral. Fortunately, Brewer received roughly $200 in donations to make up for her lost tip that night.

What Brewer experienced is hardly new, however. Last year Kelly Carter, a server at Anita’s New Mexico Style Café in Ashburn, Virginia had a similar experience. She was waiting on a young white couple and was left with no tip and an insulting note which read, “Great service don’t tip black people.” Carter must have been visibly upset because it was a few of her regular customers who ended up posting an image of the receipt online. After the story spread, people started requesting Carter as their server and leaving her generous tips to make up for what happened. According to WJLA, people were also stopping by just to give her some cash as well. Toni Jenkins, a waitress at a Red Lobster in Franklin, Tennessee posted this receipt back in 2014 to her social media pages, and it quickly made headlines. The image shows the customer’s name clear as day as well as a racial slur written in the total line. Jenkins claimed that a couple came into the restaurant and ignored her initial greeting. They eventually demanded that their food be to-go and left her without a tip and this nasty note. The customer who is being accused actually sued the restaurant and the waitress for defamation of character, and even hired a handwriting expert to prove he didn’t write the slur. Jenkins says that she never meant for her decision to share the receipt to affect the man behind the comment as much as it has, she just wanted to draw attention to modern-day racism. The fact that she received over $10k in donations probably helped her to get passed it all pretty quickly though.

Together with the fireworks for the Independence Day weekend, the latest explosive Hollywood news involves no one else but the controversial Kanye West. The famous celebrity has revealed his plans for a presidential run. Originally planned for 2024, he has stated that he is actually going to run for the 2020 Presidential elections in November. The… END_OF_DOCUMENT_TOKEN_TO_BE_REPLACED

Recent trends have reported that K-pop fans in the US are getting mixed in with current issues in politics. K-pop fan communities are using online platforms to rally up and protest against racism in the United States. In support of the #BlackLivesMatter movement, the online K-pop community has come together in protest. Never has it… END_OF_DOCUMENT_TOKEN_TO_BE_REPLACED