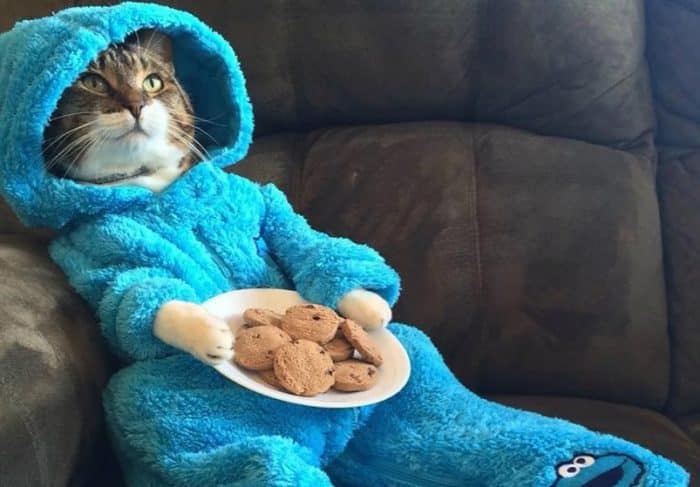 We’re pretty sure that you feel like your government owes you a lot, especially after you have seen just how much they spend on war. So it is not unnatural to get excited when a body of the government, the US government nonetheless, sends out a party invitation. What was the party about? A cat pajama-jam, courtesy of the US Embassy.

It’s not just your ordinary cat pajama party either, this one looks all out, with the poster cat even wearing a Cookie Monster outfit from Sesame Street and holding a plate of cookies. This is as real as it gets. It is quite unusual since most embassies are uptight and even restrictive about their policies. Apparently, the invitation originated from the US Embassy in Canberra, Australia. Here’s the pic that went with the email:

“Sorry to disappoint those of you who were hoping to attend this ‘cat pajama-jam’ party, but such an event falls well outside our area of expertise. It was a training error made by one of our new staff testing out our email newsletter platform,” says US Mission to Australia public affairs counselor Gavin Sundwall. No cats. No pajamas. No parties. Never trust your government folks.

U.S. Embassy Workers in Cuba Are Literally Being Microwaved to Death

For anyone wondering who this MyPillow guy is, this article will tell you all about him and his role in Trump’s last struggle for power. It is almost second nature for the internet to find humor in many serious events in government. Could this be this generation’s way of coping? We don’t really know. Let’s… END_OF_DOCUMENT_TOKEN_TO_BE_REPLACED

Trump is the First American President who gets impeached for the second time. Trump’s second impeachment became a trending topic on Twitter after the terrifying terrorist attack on Capitol Hill on the 6th of January. Twitter is at it again, being flooded with memes and Twitter jokes surrounding Trump’s second impeachment trial. Americans are trying to… END_OF_DOCUMENT_TOKEN_TO_BE_REPLACED