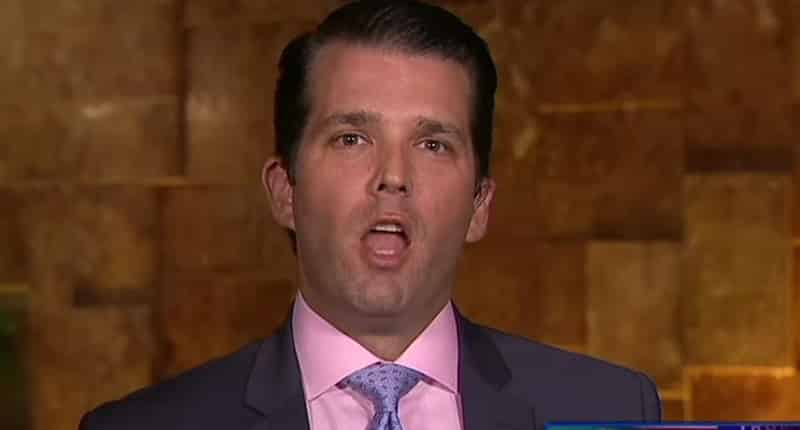 “I have more Indian blood in me than Pocahontas… and I have none” @realDonaldTrump just now. 🤣🇺🇸🤣🤣🇺🇸 so epic!!!

President Trump likes to refer to Sen. Elizabeth Warren as “Pocahontas” which is ignorant and incredibly racist all on its own, but of course, his son took it to a whole new level of stupidity. During a recent campaign rally in Topeka, Kansas the president crossed a line saying, “Pocahontas, Pocahontas. I have more Indian blood in me than Pocahontas, and I have none. I mean, sadly, but I have more than she does. They said to her, ‘Why do you say you’re of Indian heritage?’ ‘Well, my mother said that I have high cheekbones. Well, I have high cheekbones too. Hey! Maybe I’m an Indian, and I’m going to do very well.” As bad as the original statement was using a slur in a campaign rally, Donald Trump Jr. decided to quote his father on Twitter, calling his words “epic.” 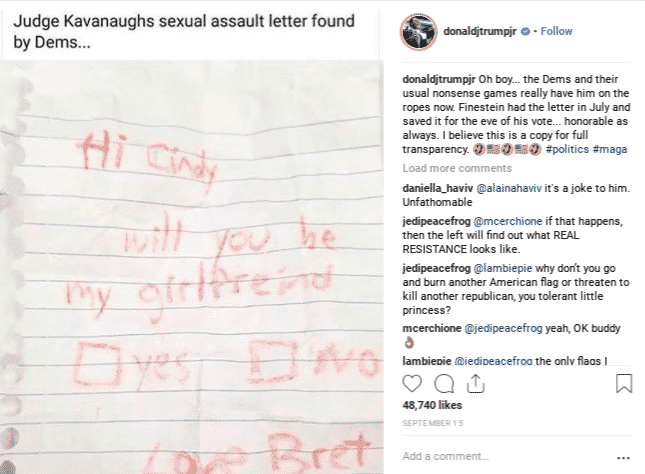 How any woman can stomach being anywhere within the vicinity of a man who would find this funny is just beyond me. While the right-wing nutjobs might not believe Christine Blasey Ford’s sexual assault accusations against Brett Kavanaugh, there’s no doubting that the woman is a survivor. It took a lot of courage for her to share her story with the world, but here’s the president’s bonehead son mocking her trauma and comparing her experience’s to a childhood crush.

I’m going to take half of Chloe’s candy tonight & give it to some kid who sat at home. It’s never to early to teach her about socialism. pic.twitter.com/3ie9C0jv2G

When Halloween came around last year, Donald Jr. decided it was the perfect time to teach his three-year-old daughter about socialism. Unfortunately for little Chloe, her father doesn’t know what the hell he’s talking about. Junior thought that by taking half of his daughter’s candy that she earned by trick-or-treating to a child who stayed at home, that he’d somehow be demonstrating socialism. If his little stunt represents any kind of political system, it would be how our government robs hardworking citizens of half of their salaries each payday. But that’s just my opinion. 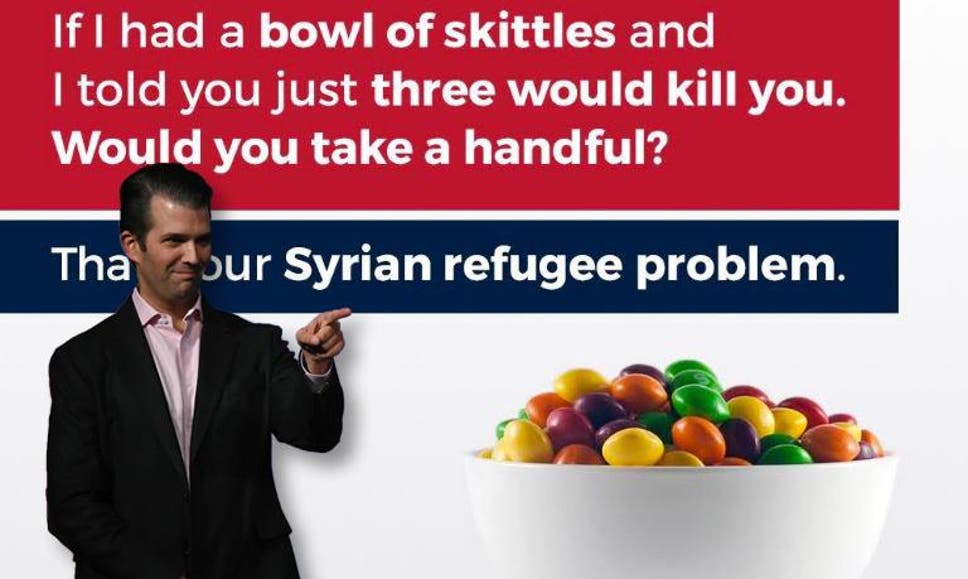 Donald Jr. seems to think it’s okay to compare human beings to a popular candy, which is exactly what he did when he wrote an incredibly offensive (and useless) tweet. Trump wrote, “If I had a bowl of Skittles and I told you just three would kill you, would you take a handful? That’s our Syrian refugee problem.” His analogy sucks, and not only because it’s written in the form of a question. It sucks because it’s so farfetched. The risk of an American citizen being killed by an immigrant or refugee is so minuscule that his whole statement falls apart. Republicans just don’t want to pay out of the government’s pockets to help out anyone who isn’t a wealthy, white American citizen.

Donald Jr. tweets, “If ur a boob guy this whole lactation thing is amazing the sports bra the wife is wearing is losing the containment battle!!!” Lactation is a natural occurrence after a woman gives birth so that she can provide her child with the proper nutrients. It’s beautiful and disgusting all at the same time, but it’s certainly not for your perverted ass to get off on. Also, how could you have such little respect for your wife to write something like this about her? Thankfully this idiot deleted this one. He probably hired a PR guy when daddy started running for president.

In an attempt to support Republican candidate Ed Gillespie, Donald Jr. ask that people go out and vote for him on twitter. He tweeted, “Let’s take @EdWGillespie across the finish line tomorrow! Virginia: get out and vote for ED and entire @GOP ticket.” Gillespie was running for governor in Virginia in 2017 and was probably thrilled to have the Trumps on his side. Unfortunately, this dumbass told voters to go out on the wrong day. His tweet asked them to go vote the day after the election was over. Good going, Don!

7. Donald Jr. On Getting Away With Assaulting Women

Can I pretend to be? @clayaiken: Eric Don't be jealous that gay guys get to stick our hands up women's shirts like that with no issue!

Dear men. Gay or straight, you need a woman’s permission before you touch her. Donald Jr.’s attempt at a joke is so pathetic it would even be juvenile if it came out of the mouth of a teenager. He tweets, “Can I pretend to be? @ClayAiken: Eric Don’t be jealous that gay guys get to stick our hands up women’s shirts like that with no issue!” Only a twisted man with predatory tendencies would think that pretending to be gay to fool women into allowing him to feel them up is funny. This tweet needs to go in his delete pile.

8. Donald Jr.’s Lies About His Meetings With Russians

When it was discovered that Donald Jr. had met with Russians during his father’s campaign, his attempt to cover up his activities were far from smooth. First, he had no memory of meeting with any Russians. Then he said he’d probably met with people who were Russian at some point, but it had nothing to do with the presidential campaign. Once he was called out on both of those lies, he made a few more fibs. The next excuse he made was that his meeting was about changing adoption policies so Americans could adopt Russian children. Since this wasn’t even a campaign issue, no one believed his story for a second.

Finally, he admitted to having met with someone (a Russian) who claimed to have had damaging information on Hilary Clinton, but it turned out to be nothing. Likely Junior was discussing hush payments to keep his father’s urine filled hooker fantasies from becoming front page news. Now that’s believable.

The Only Logical Reasons That Kimberly Guilfoyle Is Dating Doofus Trump Jr.