Mom Claims She Didn’t Mean to Offend With Son’s Halloween...

It’s that time of year again, when offensive Halloween costumes come out to play. And although sometimes whether or not an outfit is deemed offensive can be down to a matter of taste, not dressing up as Hitler should be a no-brainer.

Still, one mother seems to have thrown common sense out of the window, and dressed her school-aged son up as the infamous Nazi dictator for a Halloween party.

Janet Arsanian, a local teacher, dressed her son up in a Nazi uniform and fake Hitler moustache for the “Trunk or Treat” shindig in Boulder City, Nevada last weekend. Unsurprisingly, it wasn’t long before a photograph of the costume went viral for all the wrong reasons, with people calling it racist and distasteful.

Nevertheless, Arsanian swears that she and her son did not set out to offend with the get-up.

In a now-deleted Facebook post, she said: “I’m the proud parent of the boy in the Hitler costume and my son didn’t mean to upset anyone.

“He needed a last-minute costume and he put that together today. No we don’t worship Hitler or agree with what he did.” 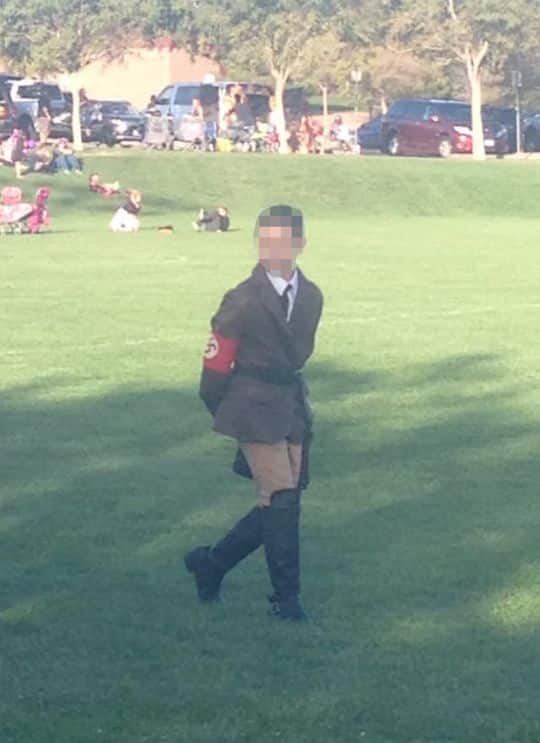 However, snaps of the child have caused outrage in the local community, with many suggesting that Arsanian should not be allowed to continue teaching in the Clark County School District.

Helena Vece, a local woman and the daughter of Holocaust survivors, was one of many not amused by the costume.

The 72-year-old told the Las Vegas Review Journal: “I I know what my mom and dad went through.

“I know what I went through (with) them as a child, I know what their memories are. I was born in Germany after the war, and to see this was so offensive.”

A spokesperson for the School District said in a statement: “We expect all of our employees to be sensitive to the varied cultural backgrounds of our students and community.”

However, they did say whether or not the teacher would be reprimanded.

Ignorant Teens Cause Outrage After Conducting Nazi Salutes at Auschwitz