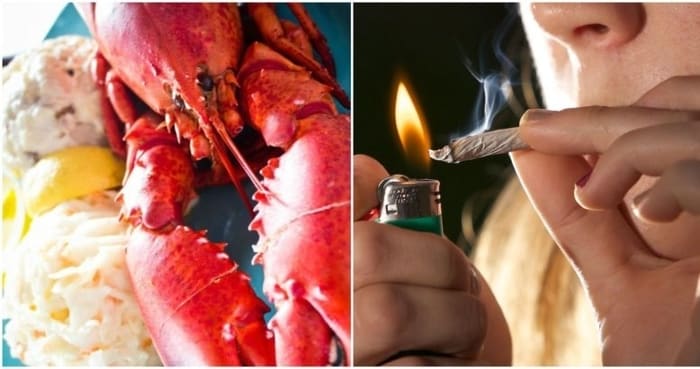 An owner of a Maine seafood restaurant has come up with an innovative and cruelty-free way to serve lobster — and her recipe features just a pinch of Mary Jane.

Journey to Charlotte’s Legendary Lobster Pound in Southwest Harbor, and you could be one of the first to attempt owner Charlotte Gill’s nouveau lobster-culling approach.

Typically, a lobster is steamed or boiled while still alive. Gill brings another step to the recipe: getting the crustacean stoned prior to cooking it.

“The animal is already going to be killed,” Gill told local news reporters. “It is far more humane to make it a kinder passage.”

And there you have it!

The result is a “steamed and stoned” lobster, and Gill alleges they suffer less than animals that are boiled without being anesthetized.

The method was apparently the consequence of Gill’s own guilty conscience – and her license to grow medical weed.

“I feel bad that when lobsters come here there is no exit strategy,” Gill stressed. “It’s a unique place and you get to do such unique things but at the expense of this little creature. I’ve really been trying to figure out how to make it better.

“The difference it makes within the meat itself is unbelievable. Everything you put into your body is energy.”

Restaurant Fined For Mixing Pet Food In Their Meals

The Michelle Obama Podcast was released on the 29th of July and can be streamed on Spotify, both for free and premium users. The world is currently hyped that the Former First Lady of the United States has released the first episode of her latest podcast. What made listeners even more excited was when she… END_OF_DOCUMENT_TOKEN_TO_BE_REPLACED

Research in Britain has deduced that there are a total of six “general” classifications of COVID-19 symptoms. The research, originally published in June of 2020, has revealed that the symptoms of COVID-19 can be generalized into six different categories. This is based on the data collected from a symptom tracking app. It has been widely proven… END_OF_DOCUMENT_TOKEN_TO_BE_REPLACED