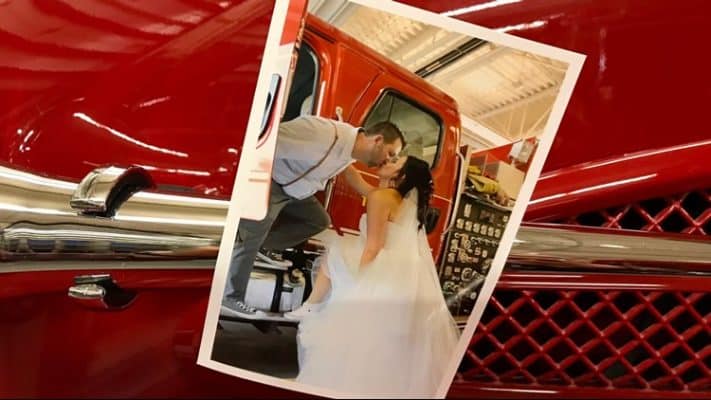 Who needs Tinder when you’re being married to a fireman? Eh? Okay, nevermind, however, one wedding got hotter than usual when a fireman’s burning passion for his job compelled him to leave his bride in order to help with a blazing house. Needless to say, he became a hero for going through fire, both literally and figuratively.

39-year-old Jeremy Bourasa was not your ordinary groom, for he was also a fireman. He also had been engaged to 32-year-old Krista Boland for five years so they decided to marry on September 1. Their hot venue? The fire station in St. Paul Park, Minnesota. All was going well and the two even exchanged their vows and proceeded to pose for the wedding photos when the alarm on the fire station suddenly went off. It was a house on fire in a nearby town.

Initially, Krista and Jeremy made promises to each other to not let anything interfere with their wedding and that they are to finish it no matter what. However, when Krista heard that the fire was getting worse and the other firefighters needed backup, she changed her mind.

“I looked at him and saw the look in his eyes. I knew he needed to be there and because we have family who literally lost everything from a fire,” said Krista to a newspaper. No words were needed, their wedding could wait, but the fire couldn’t, so Jeremy took off his wedding clothes, put on his uniform, and got on the first firetruck going out.

The burning question was, did Jeremy made it back? Of course, he did after about two hours, he even got back in time for the wedding dance where the two lovebirds set the dance floor on fire. And so, Krista was convinced that she married a real-life hero, not bad for a twin flame.

Together with the fireworks for the Independence Day weekend, the latest explosive Hollywood news involves no one else but the controversial Kanye West. The famous celebrity has revealed his plans for a presidential run. Originally planned for 2024, he has stated that he is actually going to run for the 2020 Presidential elections in November. The… END_OF_DOCUMENT_TOKEN_TO_BE_REPLACED

Recent trends have reported that K-pop fans in the US are getting mixed in with current issues in politics. K-pop fan communities are using online platforms to rally up and protest against racism in the United States. In support of the #BlackLivesMatter movement, the online K-pop community has come together in protest. Never has it… END_OF_DOCUMENT_TOKEN_TO_BE_REPLACED