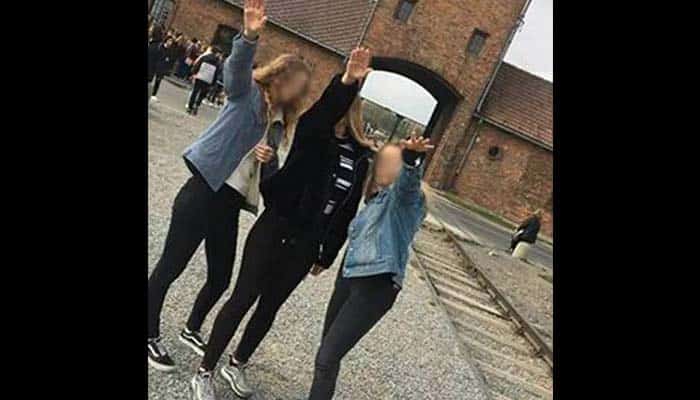 In 2014, a teen called Breanna sparked a furore online after posting a selfie of her smiling at Auschwitz. Now, a group of teen girls on a school trip to the WW2 concentration camp have managed to take stupid to a new level, after sharing a snap of themselves doing Nazi salutes at the infamous Gate of Death.

The trio uploaded the photograph to Instagram on Tuesday, before swiftly taking it down again – but not before museum authorities at the Auschwitz-Birkenau Memorial spotted it and contacted prosecutors.

Although giving a Nazi salute is not illegal in Poland, the gesture could be counted as hate speech based on religion, which holds a prison sentence of  up to three years.

The racist image came to light after it was posted to the Facebook group “Racist and Xenophobic Behaviour Monitoring Centre,” accompanied by the caption: “The girls ‘prank’ proves how education about the horrors of the Holocaust and totalitarian systems is needed, especially with anti-Semitism growing in Poland.”

Polish officials are currently attempting to identify the girls in the photograph, at which point they will inform their school about the incident.

What History Teaches Us About Child Displacement

The US arms sale industry is large and successful. More than 30% of exported weapons in the world come from the United States. They supply to no less than 90 nations making it one of the largest suppliers of weapons in the world. The US makes an estimate of almost 200 Billion dollars in annual… END_OF_DOCUMENT_TOKEN_TO_BE_REPLACED

Now that the election results are almost final, we all want to ask what’s going to happen to Donald Trump after leaving the office? All US Presidents inevitably reach the point where they leave the White House.  Besides, the constitution states that all US Presidents are subject to a two-term limit. What do former presidents… END_OF_DOCUMENT_TOKEN_TO_BE_REPLACED

This is the first time in modern history that the US held presidential elections in the middle of a pandemic. In truth, the US elections may have overshadowed COVID-19 and the side effects are limitless. America is facing a tough crisis of discontentment with the current administration. An understandable case but a situation that may… END_OF_DOCUMENT_TOKEN_TO_BE_REPLACED