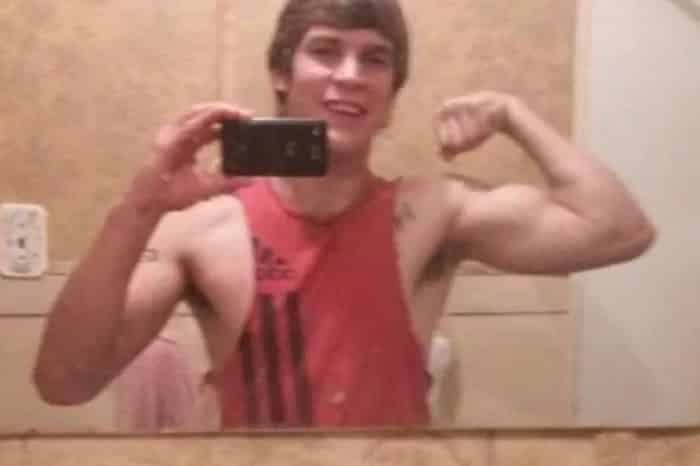 There certainly are plenty of sexual orientations out there. Some people just want to practice their freedom in sexually identifying as something obscure and unheard of. There’s even a sexual orientation for people who are attracted to vehicles, called mechanophiles and no, the hosts of Top Gear do not count among them. That is what a man named Ryan Scott Malek may have become after being seen having sex with a car exhaust pipe, no offense to mechanophiles or car exhaust pipes.

During one booze-filled evening in Kansas, Ryan probably had too much to drink. Too much, hence he probably did not know what he was doing. That day, the police received a 911 call regarding a man underneath a vehicle. However, the police arrived at the scene and along with six witnesses, saw the 24-year-old man with his pants down, seeking to place his penis in the vehicle’s exhaust pipe. Here he is:

It also seems that Ryan did not stop despite the police’s warnings, so the police had to taser him. Ryan was then arrested and brought to a local hospital to sober up. It was not known whether the “violated” car belonged to Ryan or not. It did not matter as Ryan’s charges are “unlawfully, intentionally and publicly exposed a sex organ or exposed a sex organ in the presence of another person who is not the spouse of the offender and who has not consented thereto, with intent to arouse or gratify the sexual desires of oneself or another.”

This was not Ryan’s first offense, as he previously had been arrested for pot possession and aggravated assault. Nevertheless, Ryan pleaded guilty to lewd and lascivious behavior for having sex with the parked car. He was then placed on probation for a year and was given a $200 fine. The lesson to be learned here is that you can never know your sexual orientation until you are intoxicated, also that love for your car may not just be platonic.

LEGO Builds Bugatti Chiron Supercar Out Of LEGO Parts And It Works!

Trump is the First American President who gets impeached for the second time. Trump’s second impeachment became a trending topic on Twitter after the terrifying terrorist attack on Capitol Hill on the 6th of January. Twitter is at it again, being flooded with memes and Twitter jokes surrounding Trump’s second impeachment trial. Americans are trying to… END_OF_DOCUMENT_TOKEN_TO_BE_REPLACED

Twitter thoughts about the Capitol Riots posted by millions of Americans on the platform is a great read. Readers always get to see the two sides of a story. They get to learn what truly happened, what is the current development on the situation, and more. In this case, humor is always an easy defense. Many… END_OF_DOCUMENT_TOKEN_TO_BE_REPLACED