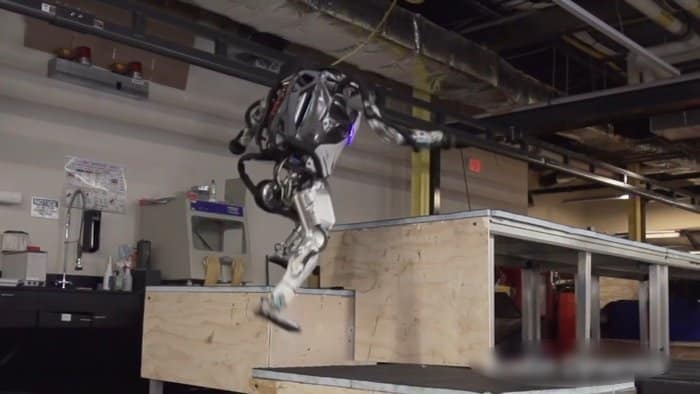 Okay, so … remember when Sarah Connor was telling Dr. Silberman about judgement day and how it was about to go down?

“It’s not a dream, you moron. It’s real. I know the date it happens! On August 29th, 1997, it’s gonna feel pretty f***ing real to you, too! Anybody not wearing two million sunblock is gonna have a real bad day, get it?! You think you’re safe and alive? You’re already dead! Everybody! Him, you, you’re dead already! This whole place! Everything you see is gone! You’re the one living in a f***ing dream, Silberman! Because I know it happens! It happens!!”

Well as you see above — The T2 concept is not as far gone as we thought.

That’s a short video from Boston Dynamics of the latest variant of their ATLAS humanoid robot doing a little unfettered scaling.

First, it springs over a log to ‘warm up’, then leaps up three steps with startling agility and grace. So, if you figured owning a two-story house was going to save you from the bots, it’s time you flame the kid’s menu/restaurant paper placement you illustrated your robot apocalypse survival plan on and begin taking the appropriate steps!

Boston Dynamics is an American robotics and engineering design company established in 1992 as a spin-off from MIT (The Massachusetts Institute of Technology).

Robotic Finger That Attaches To Smart Phones As A Feature — Whoa! [Video]