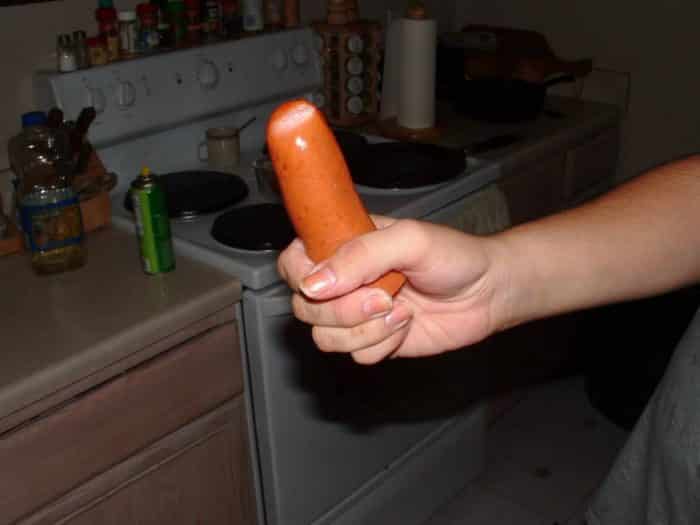 There certainly are plenty of uses for wieners other than food or doing hotdog pranks. We’re talking about the food wiener, not the “other” less wholesome wiener. So if you came for the latter, then I’m sorry to disappoint. Just kidding, I’m not sorry. Anyway, some Japanese guy invented a way to outsmart a game’s loot box mechanic using nothing but his wiener. He definitely thinks big.


If you are an avid part of the gaming community, you probably have heard of or have come across loot boxes. These are the worst manifestations of capitalism on video games where gamers pay to gamble for level or progress boosts. One mobile game in Japan called Fate/Grand Order (FGO) had a loot box mechanic that was notorious for not letting players open multiple boxes at the same time, making it tedious. Still, people love it:

So, one Japanese gamer hatched a brilliant idea to open FGO’s tedious loot box mechanic automatically. He taped his wiener to two small cartons of tomato juice, hanging over an electric whisker running at a brisk speed. This made his wiener bounce up and down, simulating the movement of a finger (okay, stay with me here) that is opening a loot box. This speeds up the loot box opening process hands-free:

The best part about it is that it does not cost too much to make and can and will help you with tedious loot box mechanics. This was not the first time people tried to cheat loot boxes, however. By the way, his wiener seems fine but his phone probably wet with wiener juice right now.

Recent trends have reported that K-pop fans in the US are getting mixed in with current issues in politics. K-pop fan communities are using online platforms to rally up and protest against racism in the United States. In support of the #BlackLivesMatter movement, the online K-pop community has come together in protest. Never has it… END_OF_DOCUMENT_TOKEN_TO_BE_REPLACED

Just this week, lawmakers approved a bill establishing the District of Columbia (D.C.) as the 51st state of the United States of America. This is after multiple calls and protests from the citizens to finally consider D.C. as a state.  However, the bill is not out of the woods yet as it faces multiple oppositions… END_OF_DOCUMENT_TOKEN_TO_BE_REPLACED