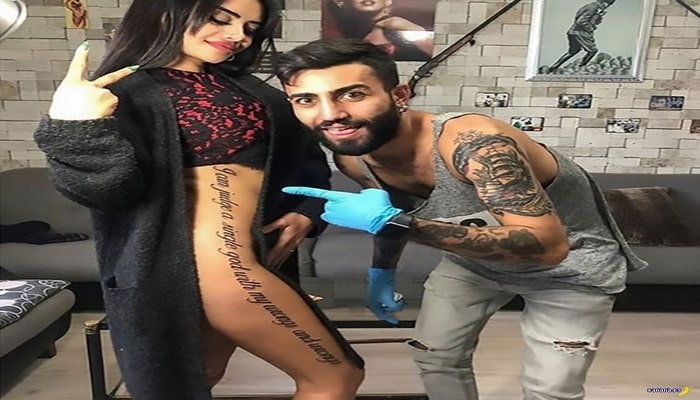 See, you think they’re going to be artistic statements that delineate your attitude to life in a marvelously poetic illustrated way — then, at the end it’s revealed you’ve just got the Korean character for ‘I’m a right bollix, me’ etched on your bum.

Reality TV star Naz Mila is all too familiar with this sort of scenario, having utilized an online translation programme to stipulate the words she had embossed down the side of her body.

Incised in black ink, from her knees all the way up to her chest, it states: “I can judge a single god with my wrongs and wrongs.”

A little puzzled by what the heck that means? Don’t worry, us too.

It’s thought that Mila was attempting to convey the favorite Turkish phrase: “Only God can judge my mistakes and truths.”

Mila, from Azerbaijan originally, was one of the most famed stars of With Zuhal Topal, a Turkish matchmaking show in which male contestants seek to unearth a bride.

The Instagram model has been frequently sharing selfies with her battalion of more than 850,000 followers, after the show was taken off air following complaints that contestants had sex for money.

However in one of her recent posts, parading her new tat, it appears she didn’t quite get the response she hoped for.