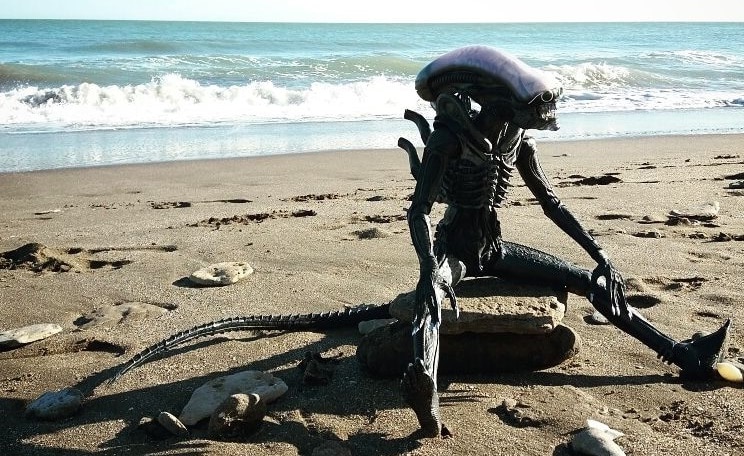 The last time someone tried to come up with an explanation to one of nature’s uncanniest phenomena, religions were invented. Well, probably, but the usual impulse of human beings is to assume that something bigger and more divine is always responsible. It is the more appealing reaction than fearing the thing, like what happened when a mysterious object washes up on a beach in South Carolina.


The said object was large, cylindrical, and appeared to be made out of plastic and foam. It was about six feet in diameter, more than 5 feet tall, and weighs 200 pounds. We’re not saying it’s aliens, but it’s aliens, man. Kidding, but it was easy to assume it was aliens because the thing was tapered toward the top, making it resemble some kind of space device, and a lot of theorists did just that. Here it is:

So what was it? Bits and pieces of the ISS? Elon Musk’s little space project? Or some form of an alien mattress? No one knows for sure, but Lauren Rust, the executive director of the Lowcountry Marine Mammal Network posits that it could not have been in the water that long. Meaning it was not a leftover debris from previous space missions. No one was also laying claim to it.

Even the Coast Guard says that they do not recognize the device as part of any existing maritime vessel. This led a lot of people to assume that it was from aliens, or worse, bits and pieces of the Death Star… probably aimed at us humans because we took too many selfies. All jokes aside, the thing was not radioactive or poisonous, so Rust and her team loaded it onto a truck and took it somewhere for further research. So begins the death of the human race due to Xenomorphs which entered through a South Carolina beach.

Gift-giving isn’t just a seasonal affair between friends, families and acquaintances. The art of gift-giving is also conducted on a national scale with countries often sending each other big, weird and expensive gifts. Experts in all things gifts, Vanilla Reindeer put together some examples of these expensive and odd gifts that have been shared between… END_OF_DOCUMENT_TOKEN_TO_BE_REPLACED

There are lots of ways you can make Pres. Trump feel welcome: you can offer him coffee, or mow a penis into a field for him to view as his plane lands. The willie in question has been chopped by Born Eco ahead of the arrival of President Trump, who visited the UK Monday for… END_OF_DOCUMENT_TOKEN_TO_BE_REPLACED

The year isn’t even halfway over, yet Donald Trump has managed to make a fool of himself and our country countless times. From inviting the national college football champions, the Clemson Tigers, all the way to the White House for some McDonald’s to his to the dreaded results of Mueller’s investigation, it has been one… END_OF_DOCUMENT_TOKEN_TO_BE_REPLACED

Republicans have always said that when they gained control in Congress, they would work to overturn Roe v. Wade and here they are, cashing in on that promise one state at a time. So far, Alabama, Arkansas, Georgia, Kentucky, Missouri, and Ohio have all passed incredibly restrictive laws on abortions, making it illegal for women… END_OF_DOCUMENT_TOKEN_TO_BE_REPLACED

If you’re on Snapchat, then you’ve probably played around with (and were likely horrified by) their filter gender swap filters. While you’re probably using these filters to send hilarious pics to your friends, some guys using them to create Tinder profiles. What likely started out as a joke has quickly evolved, and these guys are… END_OF_DOCUMENT_TOKEN_TO_BE_REPLACED

“Milkshaking” is a hilarious trend in Britain where a milkshake is thrown at and ideally lands on a far-right politician or activist. The point of this nonviolence protest is to humiliate them without causing injury. Physical injury at least. There’s no doubt that milkshaking has led to a few bruised egos. Not only is this… END_OF_DOCUMENT_TOKEN_TO_BE_REPLACED