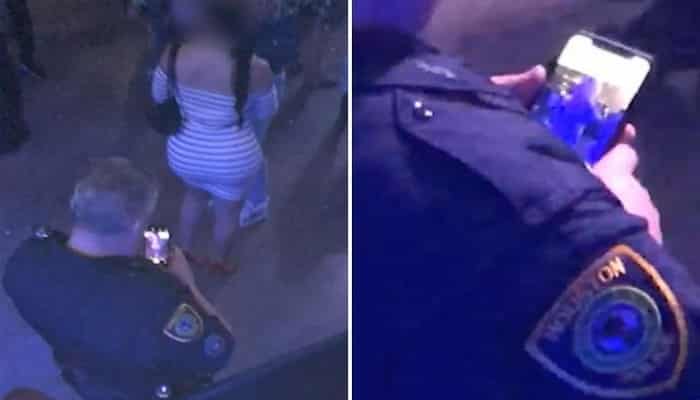 A Houston cop, in full uniform, was busted on video at a Drake concert evidently taking pics of a woman’s butt as she stood in front of him, oblivious of what was going on behind her.

The actions depicted on the video are not consistent with the expectations we have for our personnel. Upon completion of the investigation, the department will take any and all corrective action.

The concert took place at the Toyota Center. Minutes later, she filmed a second video clip of the uniformed officer, whose sleeve insignia reveals he holds the rank of sergeant accordant to the Houston Chronicle, in which she theorizes that he was then sending the pic he snapped “to his homie cops.”

The preliminary video went viral almost instantaneously. As of Monday morning, it had been retweeted roughly 25,000 times.

The twitter user who uploaded the footage did not wish to be named, and told reporters, who addressed her only by the first name Jessica, that she chuckled at the incident initially, “like wow, I can’t believe what I’m seeing.”

However she also expressed on Twitter that, later in the show, she too followed up with the shapely woman, pulling her to the side in one of the restrooms in the venue to inform her what the police officer behind her was doing.

“She laughed and asked me to text her videos, so if it makes y’all feel any better she doesn’t feel violated,” Jessica tweeted.

Just this week, lawmakers approved a bill establishing the District of Columbia (D.C.) as the 51st state of the United States of America. This is after multiple calls and protests from the citizens to finally consider D.C. as a state.  However, the bill is not out of the woods yet as it faces multiple oppositions… END_OF_DOCUMENT_TOKEN_TO_BE_REPLACED

John Bolton’s new book entitled ‘The Room Where it Happened’ had been stirring up quite the attention since it was announced for release last week. Officially released only June 23, the new book seems to threaten the Trump administration as there had been moves to get it unpublished. The request was later on turned down… END_OF_DOCUMENT_TOKEN_TO_BE_REPLACED

Learning about the Juneteenth Holiday The Juneteenth holiday, celebrated every 19th of June, is a commemoration of the liberation of enslaved African-Americans in the United States. It was on the 19th of June 1865 when Union Army General Gordon Granger announced General Order No. 3 in Galveston, Texas officially emancipating slaves in the entire state.… END_OF_DOCUMENT_TOKEN_TO_BE_REPLACED