For more than a decade, we’ve all been forced to put up with increasingly erratic behavior from one of hip hop’s most beloved performers, Kanye West. While some rush to defend the rapper and producer no matter how far down the rabbit hole he seems to go, in recent months it has become harder and harder to protect the artist.

For a diminishing faithful few, Kanye West has more than earned his latter-day insanity thanks to musical contributions he spat out more than a decade ago. For those people who aren’t convinced that West is a hip-hop da Vinci, however, the rapper’s slide from toast of the town to social pariah rivals Britney Spears’ head-shaving fall from grace for pure, gleeful schadenfreude.

None of the rapper’s public meltdowns, however, have been quite as awkward, explosive, or toxic his Kanye’s recent appearance as SNL’s first musical guest for its 44th season.

Those people who tuned in to watch Adam Driver and Kanye West open up SNL’s latest season very likely thought everything had gone according to plan. And, as far as the taping went, that’s pretty much true. According to the law of averages, however, with Kanye in one location for more than one day, some kind of insanity had to go down. And go down that insanity did once the show finished taping.

As a kind of … let’s call it a “treat,” I guess … Kanye took the stage one last time to perform another song from his newest album, Ye.

You know Ye, it’s the 23-minute album that Rolling Stone called “flaccid,” and “overlong.” Corralling nearly the entire cast of SNL (as well as visiting host Adam Driver), Kanye performed his last ditty before segueing in a speech in support of his favorite politician in the known universe: Donald Trump.

The Highlights of Rants

Over the course of several very awkward minutes first brought to light by an Instagram post from comedian Chris Rock, who was visiting the set.

Pacing back and forth along the stage (in front a LOT of mortified SNL cast members), Kanye was sure to hit all the old standbys, but here are some of the best:

He intimated he might run in 2020, essentially arguing that if Trump could do it, why not Kanye? In retrospect, it’s actually the least crazy thing Kanye said all night.

He has zero problems with Trump being a racist, saying, “Well if I was concerned about racism, I would have moved out of America a long time ago. We don’t just make our decisions off of racism. I’ma break it down to you right now: If someone inspires me and I connect with them, I don’t have to believe in all they policies.”

He called his “MAGA” cap his “Superman cape.” Kanye West also explained that the people behind the scenes at SNL tried to tell him to take the hat off before hitting camera.

And I quote: “Blacks weren’t always Democrats. It’s like a plan they did to take the fathers out the homes and promote welfare. Does anybody know about that? That’s the Democratic plan.”

He argued that all we had to do to win Trump was “Try love.”

Then, of course, Kanye said thanks for the platform before, I assume, fleeing into the night to shame a woman for inviting the unwanted advances of men by doing yoga.

In between running his youth football program and making kind of boring albums, one of Snoop Dogg’s favorite hobbies these days is mocking Kanye West and West’s combover homie, Donald Trump.

In May, Snoop put Kanye in white face …

In a mid-September rant Sirius XM host DJ Suss One, Snoop Dogg not only called Trump racist, he called anyone who supported Trump a racist. “I tell ‘em straight up, muthafucka,” stated the iconic rapper, adding “If you like [Trump] you muthafuckin’ racist. Fuck you and fuck him. Now what?”

Snoop Dogg went on (unprovoked, it should be noted) to toss Kanye into the mix, saying, “Kanye too. Don’t forget about him too. Fuck you too. Throw him in the bag, ’cause he right there with the muthafuckas.”

So, when Kanye’s rant hit center stage, it wasn’t long before Snoop weighed in. Rather than put up his own post on the issue, however, Snoop commented on a post from DJ Pooh. 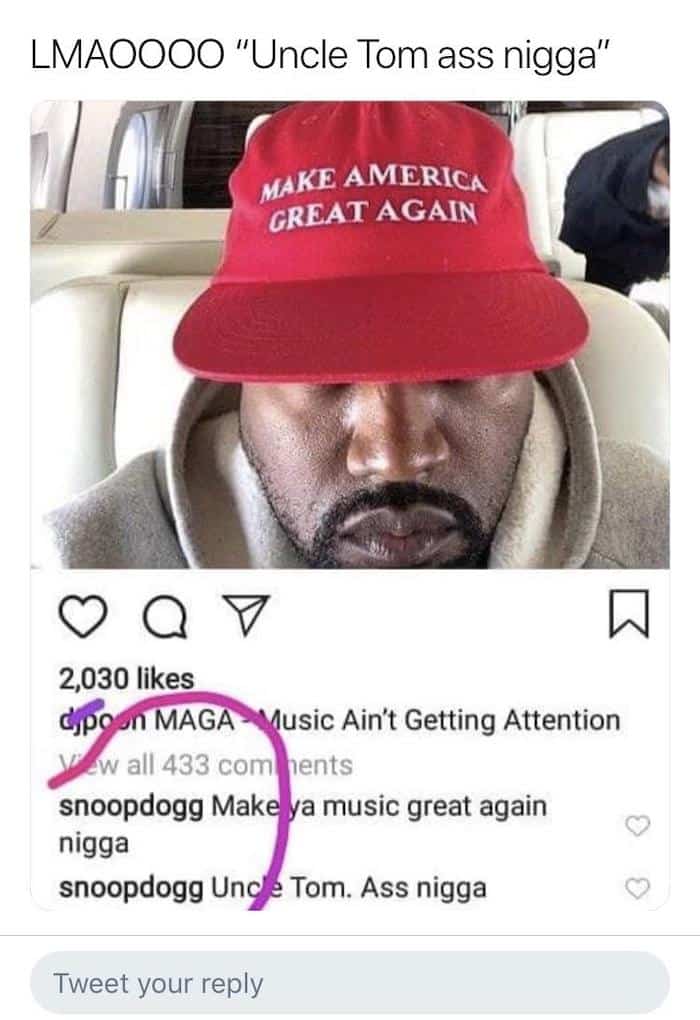 Even when he’s not putting out great music, you can’t help but love when Snoop lends his inimitable charm to any conversation. He’s got such a way with words, you know?

Almost as soon as Kanye walked off the stage, the Internet descended on the story like vultures on carrion. Crazy, crazy carrion (whose last album sucked). Official responses, however, were slim. Until a few days later, when Kenan Thompson stopped by Late Night with Seth Meyers.

The first person to call it a “hostage situation,” Thompson was quick to explain that he got the hell out of there as soon as Kanye called the cast back out on stage. In the moment, Thompson explained that he looked at West and knew something was going down. “There goes the cheese in the mousetrap,” he joked to Meyers.

Though he didn’t speak to the incident very long, Thompson did praise every member the SNL cast for practicing the restraint they did. And, to be sure, the cast of SNL acted like real professionals … until a week later.

After a full week at the center of the Kanye firestorm, SNL almost had to issue some type of response. And so they did the following Saturday night during the show’s Weekend Update. Cast member Pete Davidson came on a few minutes into the segment to speak out about the ultra-bizarre pop culture moment.

Throughout the brief bit, Davidson, who walked off the stage about halfway through West’s comments, pulled no punches when it came to his feelings. He called the speech one of the worst things he’s seen as a cast member of the show. “And I’ve seen Chevy Chase speak to an intern,” he quipped.

After explaining that Kanye wore his ‘MAGA’ hat all week (and that no one tried to get him to take it off in spite of how off-putting it was), Davidson began his (and our) conclusion by praising Kanye for his undeniable talent. The man has undoubtedly released some incredible music over the course of his career.

Of course, genius is relative. Davidson went on to say Kanye was a music genius, “just like Joey Chestnut is a hot-dog eating genius, but I don’t want to hear Joey Chestnut’s opinion on things that are not hot dog related.”

Coupled with a plea for Kanye to get back on his meds, Davidson summed things up by saying, “Being mentally ill is not an excuse to act like a jackass.”