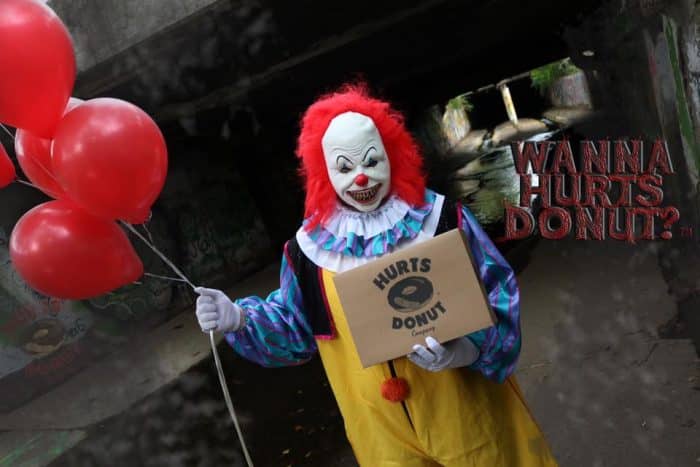 By now, Stephen King really should have been awarded the Nobel Prize for Literature for warning everyone that clowns are up to no good. That was what his novel “It” did for society, with a movie adaptation of the same title, featuring a certain clown creature named Pennywise. Oh, and Pennywise may have also single-handedly killed the clown industry for birthday parties. However, this Halloween, scary clowns will probably be back in business.


In Texas, there is a donut store named Hurts Donut which will soon kill it with the Halloween theme. As of October 1, people will now be able to have their Hurts Donut doughnuts delivered by a scary clown for an additional fee of $10. However, it will have no effect if you had it delivered to your house, so make sure to have it delivered to a different address, you know, if you are feeling evil enough.

Well, now you have the perfect Halloween prank which also comes with a sweet reward. Kas Clegg, owner of Hurts Donut revealed why they did it, so apart from being purely evil, “We always try to keep up with trends, and clowns are trending right now. It’s fall, and it’s getting close to Halloween, so we just wanted to spice it up a little bit and do a super fun delivery. We just love scary clowns.”

This Halloween is also not the first time that Hurts Donut did this, they actually began the clown promotion last year which was successful. So you know what to do for Halloween if you live in Texas. Should all restaurants and shops have the same delivery methods? Feel free to discuss below.

This Hospital Dresses Its Halloween Newborns as Pumpkins

Woman’s Halloween Decoration Scared Neighbors So Much, They Called 911

Recent trends have reported that K-pop fans in the US are getting mixed in with current issues in politics. K-pop fan communities are using online platforms to rally up and protest against racism in the United States. In support of the #BlackLivesMatter movement, the online K-pop community has come together in protest. Never has it… END_OF_DOCUMENT_TOKEN_TO_BE_REPLACED

Just this week, lawmakers approved a bill establishing the District of Columbia (D.C.) as the 51st state of the United States of America. This is after multiple calls and protests from the citizens to finally consider D.C. as a state.  However, the bill is not out of the woods yet as it faces multiple oppositions… END_OF_DOCUMENT_TOKEN_TO_BE_REPLACED