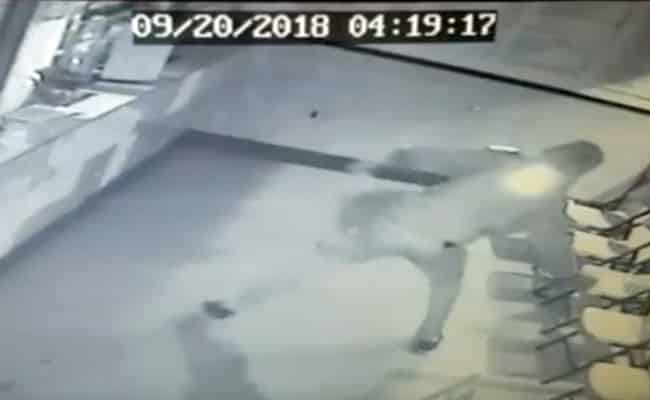 Maryland law enforcement shared security camera footage of a thief throwing a rock that ricocheted off some bulletproof glass and struck the man in the face.

Prince George’s County Police shared security camera video exhibiting the man efficaciously breaking into a carryout business in Suitland in September by using a brick or large rock to shatter a window.

The dubbed “bad luck bandit” then tries to use the same object to smash the glass safeguarding the front counter, however it bounces off the barrier.

The man’s third attempt causes the item to spring back and smack him in the face, knocking him on the ground.

Police said the burglar was on the ground for several minutes before springing up and exiting stage left from the scene.

Detectives are asking anyone who knows the identity of the man to contact the department.

Presidential pardons are one and many in the history of the US. There are many times when US Presidents granted reprieves for their citizen’s misdeeds. The US President may grant a pardon for any individual, including himself, for any crimes done against the country and its citizens. This issue of Presidential pardons has been trending… END_OF_DOCUMENT_TOKEN_TO_BE_REPLACED

President Biden has tapped Rachel Levine to be his assistant secretary of health, making her the first publicly transgender federal official. In 2017, Democratic Gov. Tom Wolf appointed Levine to her current post, making her one of the few transgender persons serving in appointed or elected positions countrywide. Biden said in a statement: “Dr. Rachel… END_OF_DOCUMENT_TOKEN_TO_BE_REPLACED

The minimum wage hike has always been an issue in the US for the past decades. With only a few hours before Biden gets inaugurated as the President of the United States, people are excited for all his promises to take place. One of these is his plans to raise the minimum wage of workers… END_OF_DOCUMENT_TOKEN_TO_BE_REPLACED