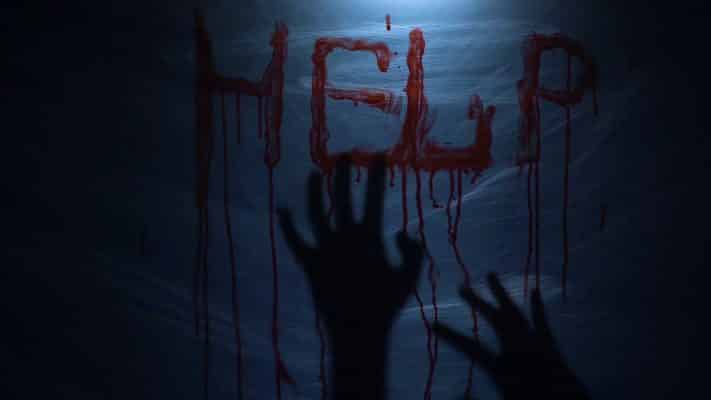 It is now officially October and Autumn and that can only mean one thing, lots of new Netflix horror shows and movies, oh and Halloween too will take place at the end of the month. Some people are certainly more excited about it than others, with some spooky and dedicated Halloween decoration choices popping up left and right. However, one North Dakota woman seems to have taken the cake.


Becky Muhs is one of those dedicated Halloweenies and takes the said holiday to heart. In fact, she even stated that it was her favorite time of the year. So she put up a compelling Halloween decoration and scrawled the words “HELP ME” on her house window using red paint along with some red handprints too. It would have been an understandable gesture, however, Becky’s house was the only one with early Halloween decorations, some could say too early even.

The result? Well, her neighbors freaked out. Neighbor Jay Thomas who lived across the street went hysterical “I look across the street and I see in my neighbor’s window, the sign that says ‘Help Me.’ That window has always had the curtains drawn. So I’m like, ‘What’s going on in here?'” So he called 911. He also tried contacting Becky soon after calling the police. Unfortnately, she was out with her husband since it was their anniversary month too.

15 minutes after the 911 call, Becky made sure to tell everyone concerned that she and her husband were safe. She was thankful though for her neighbor’s concern since that only meant she lives in a safe neighborhood. As for the police, they advised people to not call 911 again after seeing a dead body and instead congratulate their neighbors for the display.

Recent trends have reported that K-pop fans in the US are getting mixed in with current issues in politics. K-pop fan communities are using online platforms to rally up and protest against racism in the United States. In support of the #BlackLivesMatter movement, the online K-pop community has come together in protest. Never has it… END_OF_DOCUMENT_TOKEN_TO_BE_REPLACED

Just this week, lawmakers approved a bill establishing the District of Columbia (D.C.) as the 51st state of the United States of America. This is after multiple calls and protests from the citizens to finally consider D.C. as a state.  However, the bill is not out of the woods yet as it faces multiple oppositions… END_OF_DOCUMENT_TOKEN_TO_BE_REPLACED