Baby Contracts Disease From Unvaccinated Sister and The Mom’s Reaction...

You’d think it would be common sense in 2018 for people to protect their families against preventable diseases. Still, despite 90% of medical scientists saying children should be vaccinated, the anti-vax movement continues to gain traction (thanks Jenny McCarthy).

Even though the movement is causing a resurgance of infectious diseases in the US, such as measles and whopping cough, people are choosing not to vaccinate, citing debunked myths such as unsafe mercury levels or a link to autism as the reason.

One such mother recently took to Facebook to share the worrying story of her baby son, who was recently hospitalised after catching whopping cough from her unvaccinated daughter. 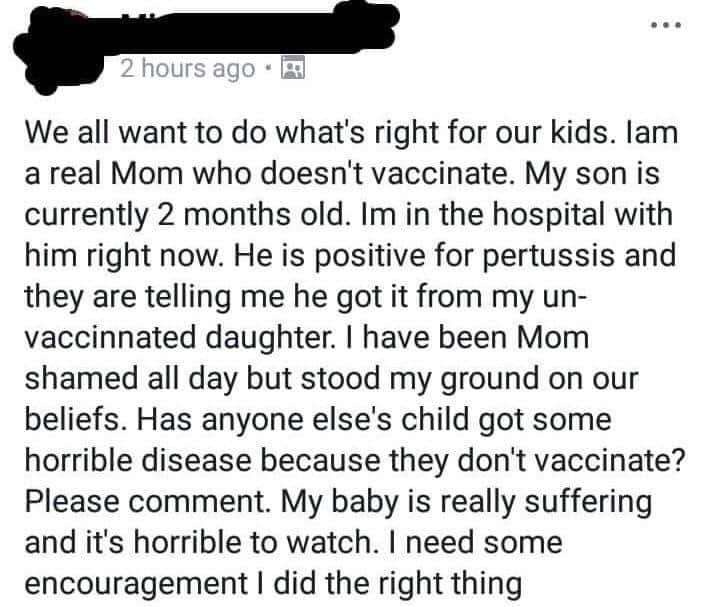 The post reads: “We all want to do what’s right for our kids. I am a real mom who doesn’t vaccinate. My son is currently 2 months old. I’m in the hospital with him right now. He is positive for pertussis and they are telling me he got it from my unvaccinated daughter. I have been mom shamed all day but stood my ground on our beliefs. Has anyone else’s child got some horrible diseases because they don’t vaccinate? Please comment. My baby is really suffering and it’s horrible to watch. I need some encouragement I did the right thing.”

Seeming to expecting sympathy for her family’s troubles, the post made its way to Reddit, where users unsurprisingly had some strong feelings about the woman putting her child in harm’s way.

However, this isn’t the first example of an anti-vax mom questioning her decision. In 2015 Tara Hills, a vocal anti-vaxxer from Ontario, Canada, turned her back on the movement, after all seven of her children caught whopping cough. While mom Jennifer Hibbon-White wrote an open-letter scolding anti-vaxxer parents after her baby son was exposed to measles from an unvaccinated child at the doctor’s office.

Penn And Teller Explain Why Immunizations Are Important [Video]