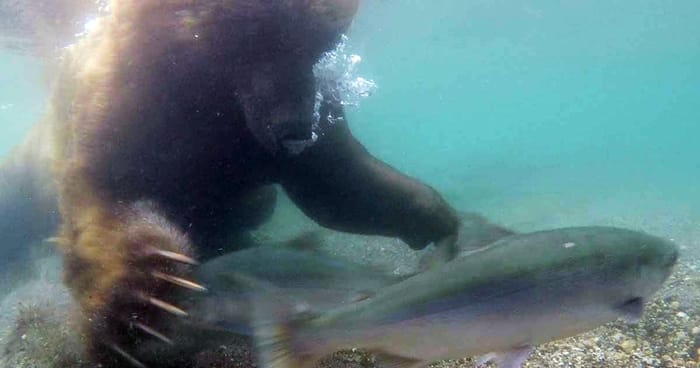 Footage from an underwater camera installed at the Katmai National Park & Preserve in Alaska has surfaced of a bear, dubbed Hollie, swimming about and diving to the bottom of a river to nab a fish.

Holy smokes, check that out!

Hollie, is a brown bear, who are only rivaled in size by their nearest relative, the polar bear, which is slightly larger on average and much less variable in size. A large male brown bear stands up 5 ft tall at the shoulder, when it is standing on all four legs. When standing fully perpendicular on its hind legs, a male could reach a height of 9.8 ft.

Brown bears range from 300 lbs to 1,500 lbs in weight, thereby, Hollie swimming with the grace of a lab whilst simultaneously angling is totally mind-bending!

In spite of their reputation, most brown bears are not very carnivorous, as they procure up to 90% of their dietary food verve from vegetable matter. All the same, they’ll eat just about anything — fish, deer, small mammals, honey, berries, plants and nuts — they’ll freckin’ eat your garbage if you let them.

Brown bears live off their fat during winter hibernation, so they are hungriest when they emerge from their caves in the spring (so don’t be anywhere around!).

This particular bear loves salmon, especially (and other fish). In Washington, Canada and Alaska, they stand in rivers and catch the fish with their paws or in their mouths.

How did he die? An African American man, George Floyd, 46, was killed by Minneapolis Police officers. Floyd was being investigated for forgery. George Floyd’s death was caused by a police officer holding him down on the ground with a knee on his neck. He was not shot to death but instead strangulated. Now, his family… END_OF_DOCUMENT_TOKEN_TO_BE_REPLACED

The Blood Test, The Swab Test, and The Saliva Test      Essentially, there are three general types of COVID-19 testing produced so far. One is the rapid test, the second is the saliva test and the other is the swab test. The rapid test (also known as the anti-body test) uses blood samples. The swab test… END_OF_DOCUMENT_TOKEN_TO_BE_REPLACED

The COVID-19 pandemic is one of the biggest modern pandemics known in history. Currently, there are more than five million confirmed cases in the world, with a total of 333,000 deaths. A total of 1.6 million of these confirmed cases are in the US alone. The world is currently in a race of finding a… END_OF_DOCUMENT_TOKEN_TO_BE_REPLACED

Despite concrete data and research, people’s opinions will always be diverse when it comes to a variety of topics including religion, politics, gender, and more. Denial is a common reaction to many important discussions and serious world events. The COVID-19 pandemic does not differ from any issues and is subject to opinions from critiques all… END_OF_DOCUMENT_TOKEN_TO_BE_REPLACED

Back in January, when the Wuhan, China coronavirus broke out, it didn’t make it to the front page of newspapers, in print or virtual form. Today, January feels like a lifetime away. Like it or not, people around the world have adapted to the new normal – staying at home, frequent hand washing, and social… END_OF_DOCUMENT_TOKEN_TO_BE_REPLACED

Since the beginning of the year 2020, the whole world has been stupefied by the rapid spread of a deadly coronavirus known as COVID-19. World superpowers in the West were unable to prevent the virus from reaching their borders. Because of this fact, the novel coronavirus COVID-19 became a world-wide pandemic no less than three… END_OF_DOCUMENT_TOKEN_TO_BE_REPLACED