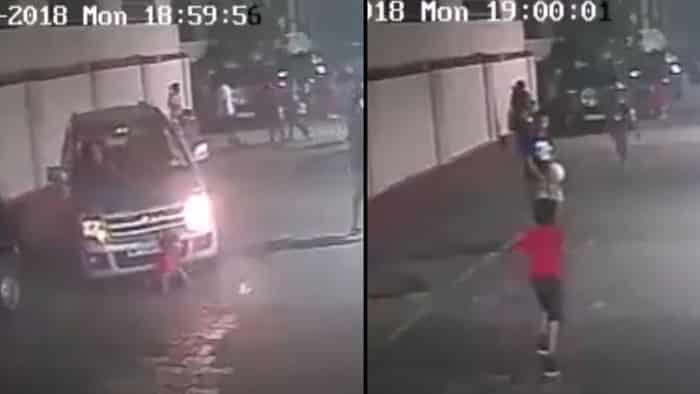 A child has had a propitious escape after he was run over by a car.

CCTV footage in India captures the horrific moment the car pulls out and rolls over the boy as he ties his laces in front of the vehicle.

The child was playing soccer in the streets with pals when the incident took place in Goregaon in Mumbai, on 27 September.

The automobile can be seen gradually reversing out of its parking spot as the children play behind, however the driver appears not to have detected the crouching child to the front of the car. The vehicle then pulls away and strikes the boy who tries to scrabble himself away momentarily, before the sedan drives over the top of him and out of shot.

As the child disappears under the car, it is difficult not to fear the worst for him, but freakishly, the child promptly gets back to his feet and rejoins his buddies, ostensibly unscathed.

That said, the video (seen below) stops with the kid still running, so there is a chance he sprinted all the way home in tears, rather than jumping straight back into the game. Whatever the case maybe, it was an exceedingly lucky escape for the boy, who presumptively barely avoided all of the wheels and the grievous damage they could have inflicted.

However, reportedly Shraddha Chandrakar, 44, was arrested for rash and negligent driving and was later posted bail.

Inspector Xavier Rego, of Dindoshi Police Station, stated the family were only confident they should make a complaint after the video went viral.

He noted: “The boy sustained minor injuries… but the family did not want to file a complaint initially. However, when the video went viral, the family was convinced to give a statement.” Based off this averment, Chandrakar was apparently arrested. Inspector Rego furthered: “Since it was a bailable offence, she was released on bail immediately.”

Toddler Dies After Getting Hit By Tablet Computer During Car Accident

Woman Tries To Buy Baby Online For $10,000; Gets Arrested

Gift-giving isn’t just a seasonal affair between friends, families and acquaintances. The art of gift-giving is also conducted on a national scale with countries often sending each other big, weird and expensive gifts. Experts in all things gifts, Vanilla Reindeer put together some examples of these expensive and odd gifts that have been shared between… END_OF_DOCUMENT_TOKEN_TO_BE_REPLACED

There are lots of ways you can make Pres. Trump feel welcome: you can offer him coffee, or mow a penis into a field for him to view as his plane lands. The willie in question has been chopped by Born Eco ahead of the arrival of President Trump, who visited the UK Monday for… END_OF_DOCUMENT_TOKEN_TO_BE_REPLACED

The year isn’t even halfway over, yet Donald Trump has managed to make a fool of himself and our country countless times. From inviting the national college football champions, the Clemson Tigers, all the way to the White House for some McDonald’s to his to the dreaded results of Mueller’s investigation, it has been one… END_OF_DOCUMENT_TOKEN_TO_BE_REPLACED

Republicans have always said that when they gained control in Congress, they would work to overturn Roe v. Wade and here they are, cashing in on that promise one state at a time. So far, Alabama, Arkansas, Georgia, Kentucky, Missouri, and Ohio have all passed incredibly restrictive laws on abortions, making it illegal for women… END_OF_DOCUMENT_TOKEN_TO_BE_REPLACED

If you’re on Snapchat, then you’ve probably played around with (and were likely horrified by) their filter gender swap filters. While you’re probably using these filters to send hilarious pics to your friends, some guys using them to create Tinder profiles. What likely started out as a joke has quickly evolved, and these guys are… END_OF_DOCUMENT_TOKEN_TO_BE_REPLACED

“Milkshaking” is a hilarious trend in Britain where a milkshake is thrown at and ideally lands on a far-right politician or activist. The point of this nonviolence protest is to humiliate them without causing injury. Physical injury at least. There’s no doubt that milkshaking has led to a few bruised egos. Not only is this… END_OF_DOCUMENT_TOKEN_TO_BE_REPLACED