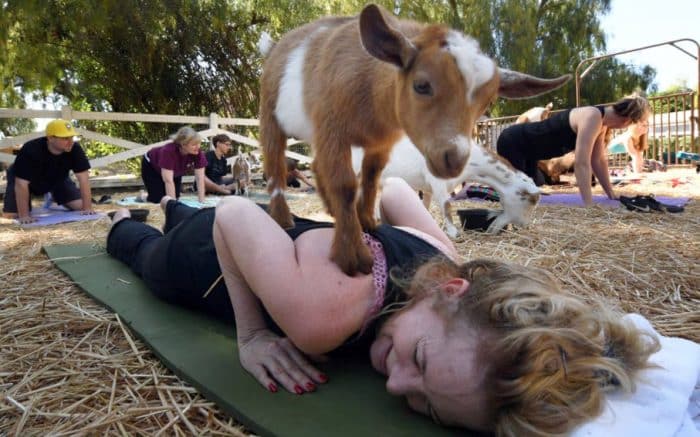 Combining two things you love can often result in hybrid masterpieces or outright weird rituals. But hey, there are lots of reasons why people often do this, saving time is one thing, then there are those who just thought “why not?” So, people who love yoga and apparently goats came up with something called the goat yoga and it’s not baaah-d.


Oh, by goat we mean the four-legged animal, not the “greatest of all time,” sorry hardcore yogis, you’ll have to share the spotlight with goats in this one. Anyway, there are currently two goats in Los Angeles, U.S. named Pippin and Sparky who are professional party animals who are also professional yogis. Often, the two err, “kids” get invited to gatherings to perform back massages by standing on the backs of humans.

Other times they do what is called a goat yoga where the human participants try to do yoga poses with a goat on their backs. As if regular yoga was not hard enough already. Additionally, goat yoga has spread to other states like Washington where students in the Central Washington University often do goat yoga as a form of recreation.

According to the participants of goat yoga, it was a lot more fun and relaxing than regular yoga. They mentioned that since the goats kept interrupting them, there was a lot of smiles and laughs going on, helping to build a more friendly atmosphere compared to regular yoga where people are quiet and too focused. Additionally, it seems that the goats are also having fun, especially since they loved it when humans smile at them.

The moment he was inaugurated, immediate changes made by Biden made headlines across the country. These are many of the controversial issues and topics that were shunned and ridiculed by the former administration. Americans can finally breathe a sigh of relief that these concerns have finally reached government policies. It seems clear that Biden has been… END_OF_DOCUMENT_TOKEN_TO_BE_REPLACED

Presidential pardons are one and many in the history of the US. There are many times when US Presidents granted reprieves for their citizen’s misdeeds. The US President may grant a pardon for any individual, including himself, for any crimes done against the country and its citizens. This issue of Presidential pardons has been trending… END_OF_DOCUMENT_TOKEN_TO_BE_REPLACED