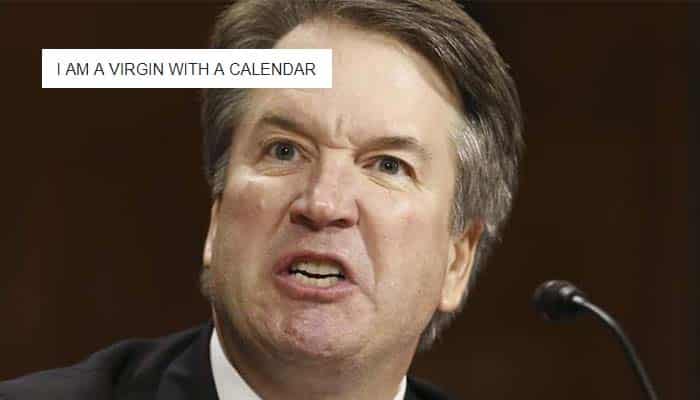 The main news story of the week has been Brett Kavanaugh’s hearing, after the US Supreme Court nominee was accused of sexual misconduct by three women.

Kavanaugh denied the allegations at the trial, with his testimony following that of Christine Blasey Ford’s. The research professor accused Kavanaugh and his friend Mark Judge of assaulting her at a high school party in 1982, when she was 15 and they were 17.

In an emotional testimony, in which she struggled to hold back tears, Blasey Ford said the incident had “drastically affected her life.”

Yet Kavanaugh responded to her words in Trump-esque fashion. During the 40-minute questioning by Democratic senators and a sex crimes prosecutor, a seriously pissed-off Kavanaugh managed to blame the editor of his high school yearbook, interrupt a female senator, and call Democrats an “embarrassment.”

He also managed to find the time to read out his college admissions essay, as well as show off his 1982 calendar.

Although the trial was painful to watch, at least the internet managed to diffuse some of the tension by turning Kavanaugh’s angry face into a meme.

When you’re just a normal even-tempered guy who should definitely have one of the most powerful jobs in the country pic.twitter.com/WnNeHsBDkx

Coming out of my cage and I’ve been doing JUST FINE pic.twitter.com/S66mVOMgIA

brett is too emotional to be a supreme court justice pic.twitter.com/J8DlpQnaUA

MILK IS TOO GODDAMN SPICY!!! pic.twitter.com/vI21gytE0r

The Blood Test, The Swab Test, and The Saliva Test      Essentially, there are three general types of COVID-19 testing produced so far. One is the rapid test, the second is the saliva test and the other is the swab test. The rapid test (also known as the anti-body test) uses blood samples. The swab test… END_OF_DOCUMENT_TOKEN_TO_BE_REPLACED

The COVID-19 pandemic is one of the biggest modern pandemics known in history. Currently, there are more than five million confirmed cases in the world, with a total of 333,000 deaths. A total of 1.6 million of these confirmed cases are in the US alone. The world is currently in a race of finding a… END_OF_DOCUMENT_TOKEN_TO_BE_REPLACED

Despite concrete data and research, people’s opinions will always be diverse when it comes to a variety of topics including religion, politics, gender, and more. Denial is a common reaction to many important discussions and serious world events. The COVID-19 pandemic does not differ from any issues and is subject to opinions from critiques all… END_OF_DOCUMENT_TOKEN_TO_BE_REPLACED

Back in January, when the Wuhan, China coronavirus broke out, it didn’t make it to the front page of newspapers, in print or virtual form. Today, January feels like a lifetime away. Like it or not, people around the world have adapted to the new normal – staying at home, frequent hand washing, and social… END_OF_DOCUMENT_TOKEN_TO_BE_REPLACED

Since the beginning of the year 2020, the whole world has been stupefied by the rapid spread of a deadly coronavirus known as COVID-19. World superpowers in the West were unable to prevent the virus from reaching their borders. Because of this fact, the novel coronavirus COVID-19 became a world-wide pandemic no less than three… END_OF_DOCUMENT_TOKEN_TO_BE_REPLACED

For months since the start of 2020, the attention of the world has focused on immediate response efforts to contain and combat the novel coronavirus, also known as COVID-19. The deadly virus has pushed millions of people into isolation.  This kept people in their homes for weeks and months away from their work, their friends,… END_OF_DOCUMENT_TOKEN_TO_BE_REPLACED