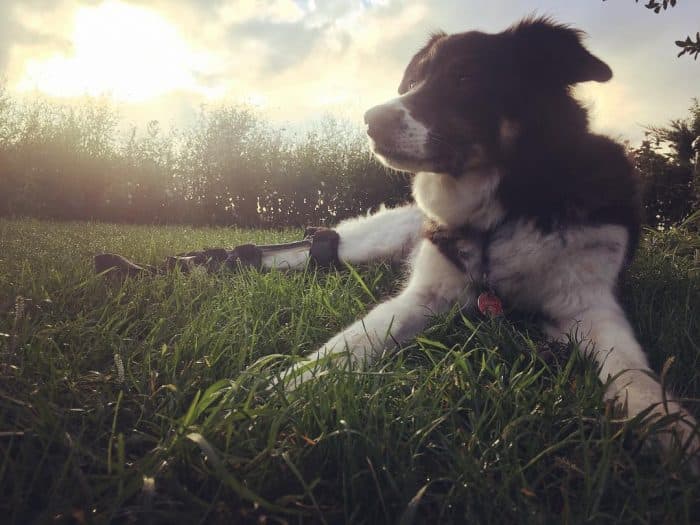 Remember that one time where we branded one dog as the best “good boy?” it turns out, there is even a better one and is now filling in the role of a superhero. This is as real as it gets, and no, we are not talking about Krypto, Superman’s Superdog pet. This one is even better than that since he can detect suffering and come to the aid of sad humans.

When Piggy wants a 2am walk (he got one) pic.twitter.com/KWCslmnUck

Meet Piggy, the super dog. Ever since he was just two-months-old a bus hit him and this made him lose one of his legs and cripple another. It was only because of the kindness and love of a veterinarian that he was able to live and regain back his strength. Piggy was also given a leg brace so he can walk.

Everyone thought that Piggy would not be able to survive and grow to a normal sized dog because of what he suffered, but he came through. Hell of a superhero origin story, however, his superpower is that he can detect the suffering of people around him.

Piggy’s caretaker and savior, Tod Emko, said that during their walks, Piggy would often run towards lone people and put his paw on them to let them know they are not alone. The people Piggy did this to would often burst into tears and be happy at the same time that someone knew what they needed and how sad they were at the moment.

It seems that Piggy was exposed to a lot of sadness, redemption, and love that he became sensitive to human beings. Of course, Piggy’s superhero deeds did not go unnoticed and unrewarded, hence they made him a comic book character so he will be immortalized.

Piggy also does regular therapy sessions, helping people in trauma centers, particularly children. Without a doubt, Piggy is the superhero we all need and deserve. This also goes to show that not all superheroes wear capes, some of them also chase around squirrels in the park.

Presidential pardons are one and many in the history of the US. There are many times when US Presidents granted reprieves for their citizen’s misdeeds. The US President may grant a pardon for any individual, including himself, for any crimes done against the country and its citizens. This issue of Presidential pardons has been trending… END_OF_DOCUMENT_TOKEN_TO_BE_REPLACED

President Biden has tapped Rachel Levine to be his assistant secretary of health, making her the first publicly transgender federal official. In 2017, Democratic Gov. Tom Wolf appointed Levine to her current post, making her one of the few transgender persons serving in appointed or elected positions countrywide. Biden said in a statement: “Dr. Rachel… END_OF_DOCUMENT_TOKEN_TO_BE_REPLACED

The minimum wage hike has always been an issue in the US for the past decades. With only a few hours before Biden gets inaugurated as the President of the United States, people are excited for all his promises to take place. One of these is his plans to raise the minimum wage of workers… END_OF_DOCUMENT_TOKEN_TO_BE_REPLACED