Flat-Earthers Think the Sun is Shrinking and That’s Why We...

It may seem hard to believe that in 2018 we’re still debating whether or not the Earth is round, but here we are. Despite plenty of science to the contrary, there are people out there who genuinely think the Earth is flat. Whether they’re convinced that NASA is enacting a mass cover-up of the world’s true shape, or believe it because a rapper told them so, 2% of American’s believe the conspiracy theory of a Flat Earth.

And now, Flat-Earthers have a new explanation for their bizarre beliefs, this time relating to the seasons. Last Sunday was the September Equinox, when the Sun crosses the celestial equator from north to south. This means the start of autumn and the incoming of shorter days and longer nights. For this to occur, the Earth needs to be round, as the changing of the seasons depends on the tilt of the planet’s axis.

You would think this would disprove the Flat Earth theory, but apparently not. According to subscribers of the theory, the September and March Equinoxes are the result of the Sun shrinking (yes, really).

Science says that the Sun is over 92 million miles away from us and has a radius of 432,289 miles. But for some reason, Flat Earthers think that the Sun is only 3,000 miles in radius. The Earth is 196.9 million miles, so the Sun would be tiny by comparison and acts as a spotlight on our planet. Flat-Earthers also believe that the Sun sits directly above the planet, where it orbits the North Pole – when the sun is above your head it’s daytime, when it’s not, it’s night. Simple.

If you think that sounds crazy, then you’d be right, but here is a diagram from the Flat Earth society to help clear things up for you anyway. 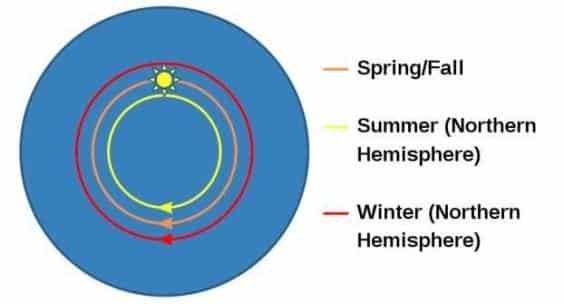 For this hypothesis to be correct, the Sun would never set or dip below the horizon, and light would literally have to bend (as this YouTube video attempts to demonstrate).

Live Science have done a thorough investigation into the “science” behind the Flat Earth theory and the Equinoxes, basically debunking it. But somehow, we doubt Flat-Earthers will be convinced, with Flat Earth theory being added to the curriculum at a majority of high schools this year.

Not Another Conspiracy Theory: Is the Blood Moon a Sign of the Apocolypse?