Sexual Assault Only Matters When You Can Score Political Points:...

When Republicans complain about President Bill Clinton’s consensual-if-wrong Oval Office philandering, you can practically taste the hypocrisy and irony. This is the party that ran a candidate that was a known pedophile, and the party that is currently defending a judge against similar charges of sexual assault. The Republican Party has embraced sexual predators with open arms—provided, of course, that they’re white conservative men with lots of money.

Ladies, gather round for a pro sexual violence panel!

In the video above, we are treated to a “”focus group”” of female Republicans who just so happened to say they didn’t care if Brett Kavanaugh groped Christine Blasey Ford. Would it surprise you to learn that those “regular women” in the focus group were, in fact, Republican Party operatives and supporters with deep roots and a strong personal incentive in toeing the party line? If so, I hope you enjoy the rest of your first day reading about modern American politics.

Highlights included someone saying that, since the Ford wasn’t raped, who cares, and another woman saying that Kavanaugh’s behavior was just a normal part of growing up. 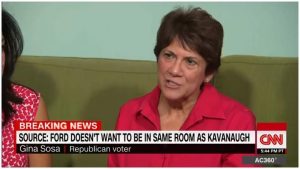 Gina Sosa, who appears in the video above and just so happens to be a former Republican candidate for a Florida House seat, presented the following brain teaser:

She came in dead last in her primary, and maybe you can see why.

Her main point is, essentially, “Way to make a mountain out of a molehill you guys.” You know, people just commit sexual assault in high school all the time! It’s just a normal part of growing up, to grope a women laying on a bed and attempt to forcibly remove her clothes while covering her mouth. That’s just what boys do when they’re not talking about grabbing women by the pussy and forcing them to kiss you! Women’s rights to not suffer sexual violence are meaningless before a young boy’s testosterone levels! So no biggie, guys.

That’s a transparently insane point of view. Even if, somehow, sexual assault was something expected of young men, that would not be okay at all. This carte-blanche “he was a kid” defense is saying that sexual assault is okay, provided it’s not penetrative rape, you’re under eighteen, and you’re a prominent Republican jurist. That is an abhorrent, untenable, turd-munching position. I wonder how the members of that panel would feel if their family members had been assaulted.

It’s all a scam by the “demon-rats”

But why didn’t we hear about Ford’s assault before Kavanaugh was up for a Supreme Court seat? Yeah, it’s hardly as if sexual assaults and rapes regularly go unreported for fear of retribution by the attacker and their family or straight-up disbelief on the part of the (largely male) police force.

Obviously, if it were a “real” sexual assault and not a politically motivated hack job by Nancy Pelosi and her “demon-rats” in tow, it would have been reported back when it happened. You know, just like all those assaults committed by Bill Cosby that were reported immediately and totally taken seriously. It definitely didn’t require a years-later collection of dozens of similar complaints to convict the dude of serious sexual violence.

Defending Kavanaugh by saying he didn’t get in trouble for it at the time just blames the victim. We’re seeing the Anita Hill playbook all over again: smear and shame the accuser into silence, and if they don’t shut up, discredit them with lies and malicious interpretations of the truth.

When your best defense is baselessly calling the opposing argument a lie, that’s a good sign you’ve roped yourself into a pretty garbage argument.

Even before this whole story broke, long-suffering Anita Hill wasn’t too optimistic about the chances of her hearing today. Asked on John Oliver’s Last Week Tonight if she believed her 1991 Congressional hearing about Clarence Thomas’s behavior would have gone differently if held today, Hill said, resignedly, that, in today’s world, she didn’t even believe the hearing would happen.

John McCain Bitch Slaps Trump From Beyond the Grave