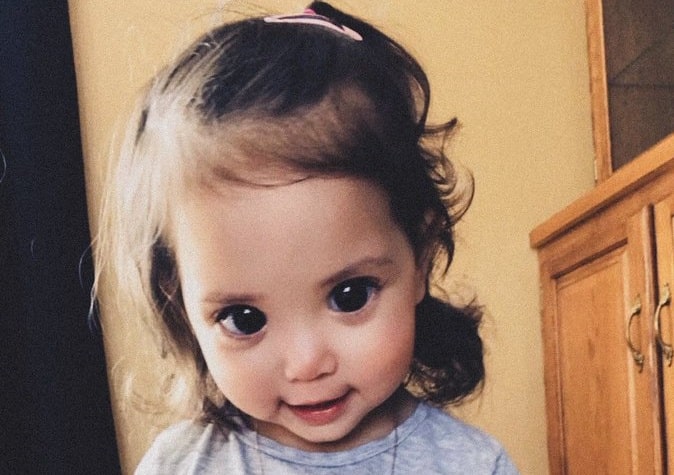 More often than not, genetic or birth defects are very negative and are generally unwanted by parents or everyone else. It is also rather unfortunate and cruel that babies have to endure this sort of genetic roulette. Most of them will have to carry those like crucifixes throughout their lives. Not all genetic disorders are poorly received, however, as one little girl has been getting praises because of them.

Mehlani wants to say thank you to everyone for their kind sweet words! She has no idea what Twitter is but I told her everyone loves her & thinks she’s beautiful ? pic.twitter.com/ZEzbo1ZJBn

Mehlani Ortega has recently been taking Twitter by storm, and she is barely two-years-old (beat that millennials). But it was not Mehlani’s tweets that got the internet impressed, it was her eyes, which appear to be big, black and doll-like in appearance. Ever since her mother, Karina, posted pictures of her on Twitter, Mehlani has since become viral.

According to Karina, Mehlani was born like that due to a condition known as Axenfeld-Rieger syndrome. The said genetic disorder causes facial deformities and other abnormalities in facial features. Most of the time, the condition affects the nasal bridge, forehead, and mid-face. As a result, those who suffer from the condition will have strange looking eyes. Additionally, Mehlani had to undergo surgery at five-months-old to correct a malformed drainage canal in her eyes, sadly, her eyes could not be fixed yet. Her vision is normal at the moment.

Shes so precious inside & out, with a heart of gold ? pic.twitter.com/mjIypBWdH1

Despite the compliments that Mehlani and Karina are getting, the latter often fears what would happen to her baby if she grows up. In particular, Karina is worried that Mehlani might get bullied in school because of her condition and her appearance. So far, Mehlani has been getting positive attention.

I get so nervous thinking about her starting school. What if other kids are mean about her eyes & she gets made fun of? What if she starts to hate her unique gorgeous eyes? It makes me want to cry thinking about it because she’s so strong & sweet & been through so much already ?

People have also been supportive of Karina and Mehlani. With some even claiming that it was a cute-kid syndrome and that Karina has done a great job being a mom.

The Blood Test, The Swab Test, and The Saliva Test      Essentially, there are three general types of COVID-19 testing produced so far. One is the rapid test, the second is the saliva test and the other is the swab test. The rapid test (also known as the anti-body test) uses blood samples. The swab test… END_OF_DOCUMENT_TOKEN_TO_BE_REPLACED

The COVID-19 pandemic is one of the biggest modern pandemics known in history. Currently, there are more than five million confirmed cases in the world, with a total of 333,000 deaths. A total of 1.6 million of these confirmed cases are in the US alone. The world is currently in a race of finding a… END_OF_DOCUMENT_TOKEN_TO_BE_REPLACED

Despite concrete data and research, people’s opinions will always be diverse when it comes to a variety of topics including religion, politics, gender, and more. Denial is a common reaction to many important discussions and serious world events. The COVID-19 pandemic does not differ from any issues and is subject to opinions from critiques all… END_OF_DOCUMENT_TOKEN_TO_BE_REPLACED

Back in January, when the Wuhan, China coronavirus broke out, it didn’t make it to the front page of newspapers, in print or virtual form. Today, January feels like a lifetime away. Like it or not, people around the world have adapted to the new normal – staying at home, frequent hand washing, and social… END_OF_DOCUMENT_TOKEN_TO_BE_REPLACED

Since the beginning of the year 2020, the whole world has been stupefied by the rapid spread of a deadly coronavirus known as COVID-19. World superpowers in the West were unable to prevent the virus from reaching their borders. Because of this fact, the novel coronavirus COVID-19 became a world-wide pandemic no less than three… END_OF_DOCUMENT_TOKEN_TO_BE_REPLACED

For months since the start of 2020, the attention of the world has focused on immediate response efforts to contain and combat the novel coronavirus, also known as COVID-19. The deadly virus has pushed millions of people into isolation.  This kept people in their homes for weeks and months away from their work, their friends,… END_OF_DOCUMENT_TOKEN_TO_BE_REPLACED