The Twitter Vine app has received a large following in just a few shorts days and many of those followers are fans of adult entertainment.

When Vine users find inappropriate videos they do have the option to flag that content as inappropriate, which in turn can help remove the adult videos from the social networks linking structure. 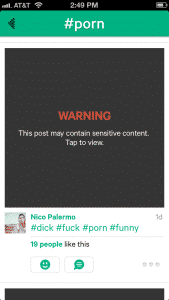