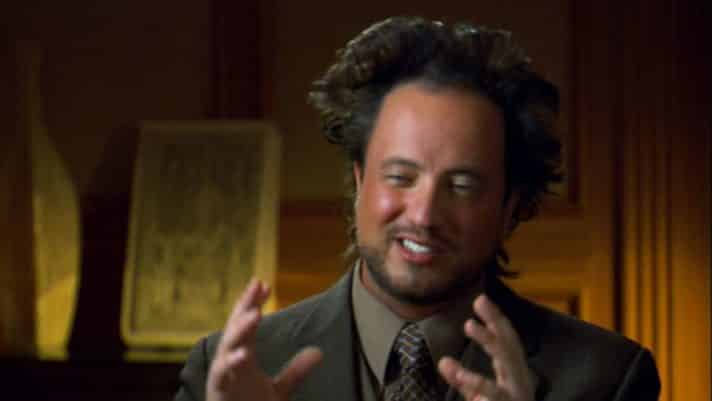 Ever since people began seeing strange objects across the sky, different imaginations about otherworldly life forms have emerged. More so after the first man was sent to space and the moon. Since then, people have often wondered what life would be like for other creatures that may have existed in their own planets. So when the Mars Curiosity Rover recently snapped some pics of what appeared to be a bottle on Martian soil, alien theorists went nuts.


Self-proclaimed UFO hunter Scott Waring simply cannot let this one pass by unnoticed. Waring noticed something odd in the official photos posted in the NASA website. The said photos were the ones taken by Mars Curiosity Rover. Waring claims that what appeared to be a bottle on the soil is actually a remnant of an alien civilization on Mars.

“There appears to be an antique bottle laying on its side in the dirt under the rover. The bottle is small…about three inches across, but we have all seen an old bottle in the dirt before, and clearly here is another one on Mars. The object is very reflective, rounded and has a long neck just like a bottle here on earth may have. Remnants of an ancient culture,” stated Waring.

Unfortunately, Waring did not specify whether it was Coke or Pepsi, probably Coke though, aliens love those. Nevertheless, Waring claims that the said photos are strong proof of alien life on Mars. It is worth noting that Waring has his own website dedicated to proving alien life on other nearby planets. The website is highly disputed though, often criticizing Waring for paranoia and conspiracy mongering.

What do you guys think? Bottle or rock? If it’s the former, what brand then? Feel free to discuss in the comments below?

The Blood Test, The Swab Test, and The Saliva Test      Essentially, there are three general types of COVID-19 testing produced so far. One is the rapid test, the second is the saliva test and the other is the swab test. The rapid test (also known as the anti-body test) uses blood samples. The swab test… END_OF_DOCUMENT_TOKEN_TO_BE_REPLACED

The COVID-19 pandemic is one of the biggest modern pandemics known in history. Currently, there are more than five million confirmed cases in the world, with a total of 333,000 deaths. A total of 1.6 million of these confirmed cases are in the US alone. The world is currently in a race of finding a… END_OF_DOCUMENT_TOKEN_TO_BE_REPLACED

Despite concrete data and research, people’s opinions will always be diverse when it comes to a variety of topics including religion, politics, gender, and more. Denial is a common reaction to many important discussions and serious world events. The COVID-19 pandemic does not differ from any issues and is subject to opinions from critiques all… END_OF_DOCUMENT_TOKEN_TO_BE_REPLACED

Back in January, when the Wuhan, China coronavirus broke out, it didn’t make it to the front page of newspapers, in print or virtual form. Today, January feels like a lifetime away. Like it or not, people around the world have adapted to the new normal – staying at home, frequent hand washing, and social… END_OF_DOCUMENT_TOKEN_TO_BE_REPLACED

Since the beginning of the year 2020, the whole world has been stupefied by the rapid spread of a deadly coronavirus known as COVID-19. World superpowers in the West were unable to prevent the virus from reaching their borders. Because of this fact, the novel coronavirus COVID-19 became a world-wide pandemic no less than three… END_OF_DOCUMENT_TOKEN_TO_BE_REPLACED

For months since the start of 2020, the attention of the world has focused on immediate response efforts to contain and combat the novel coronavirus, also known as COVID-19. The deadly virus has pushed millions of people into isolation.  This kept people in their homes for weeks and months away from their work, their friends,… END_OF_DOCUMENT_TOKEN_TO_BE_REPLACED