It has never been easier to fake a news story. Mostly because as a whole our country has become so damn gullible, but also because we allow older people to use computers. Studies have shown that be removing anyone born before 1970 from Facebook, the distribution of fake news stories would be reduced by 100 percent. Internet trolls know this, but they still love the satisfaction of having people fall for their adorable little hoaxes. Hurricane Florence has inspired a number of fake news stories, some that were actually concocted by media outlets themselves all for the sake of higher ratings. Several managed to go viral, convincing many that they were real. Here’s a look at a few fake Hurricane Florence news stories that are making their rounds online.

Believe it or not, this is a shark on the freeway in New Bern, North Carolina. #HurricaneFlorence pic.twitter.com/ANkEiEQ3Y6

Sharks are leaving the oceans and taking to the flooded streets of North Carolina. At least that’s what some Twitter users would like you to believe. This fake news story went viral, and few people checked its legitimacy before taking it as the truth. The same exact image was shared during Hurricane Harvey. It wasn’t even an original idea, and people still fell for it. Oh, humanity.

Weather Reporter Gets Blown Away

So dramatic! Dude from the weather channel bracing for his life, as 2 dudes just stroll past. #HurricaneFlorence pic.twitter.com/8FRyM4NLbL

When weather reporter Mike Seidel got in front of cameras to report on the harsh winds of Hurricane Florence, he probably didn’t anticipate anyone walking through his shot. He appears to be struggling to stand, and his body language makes it seem like he could blow away at any moment. All of Seidel’s credibility was shot to hell, however, when two guys walk across the parking lot with ease in the background. It doesn’t even look like it’s very windy where they’re walking, just yards away from the reporter. Can you say wind machine? The network tried to save face by pointing out that Seidel was standing on the grass while the guys behind him were walking on concrete. That apparently makes all the difference in the world.

It’s a shame that CNN’s ratings are down 41%. What’s worse is there’s a simple solution that they refuse to accept. Stop Lying to try to make @realDonaldTrump look bad. https://t.co/O3XyWchsJh pic.twitter.com/BCUCxKnOvO

If you’ve ever fallen for a piece of fake news, find comfort in the fact that so did Donald Trump Jr. So, basically, you’re just as gullible as the man who was created from the sperm of the world’s dumbest president. Trump Jr. thought he caught Anderson Cooper in a lie when he posted this photo of him standing in a deeply flooded area when his cameraman seems to be standing in a foot or two of water. People were accusing him of kneeling or crouching down to make Hurricane Florence appear far worse than it is. Unfortunately for these people, the photo is actually 10 years old and was taken during Hurricane Ike. Cooper defended himself by pointing this out and telling people that he was using his body to show that the flood levels were receding. Whoops!

Trump Supporters Are Being Refused Gas 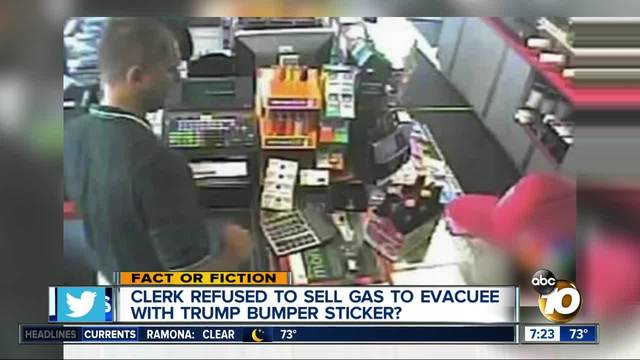 When a political satire blogger posted a story about a gas station clerk denying Trump supporters gasoline during Hurricane Florence, the news spread like wildfire. Even though the article was clearly marked as satire, it started trending on social media and even made it into real news stories. If only people would learn to read more than headlines, we might not have such issues!

4 Times FEMA Screwed Up Since Trump Was Elected