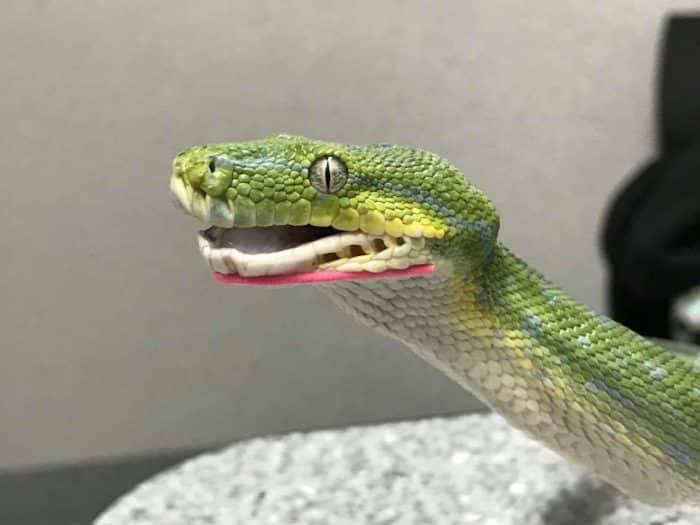 Dental issues have been getting a lot more common for us human beings. This is more apparent with the younger generations, but experts actually blame soft and processed food which are bad for the teeth. Apparently, modern food technology is killing our need to chew like cavemen and develop ideal jaws and teeth. Hence the need for braces. Still, one snake proves that braces are not just for hoomans.


A green tree python named Toothless has a host of dental problems comparable to human beings. In her worst case yet, she suddenly developed an overbite, where the upper and lower jaw gets poorly aligned to the point of making the upper jaw looking bigger and deforming the face and the head, quite common among humans, really.

Apparently, Toothless was just enjoying her usual meal during one feeding session when her “left lower jawbone folded and got stuck in her throat” according to a doctor from HerpVet, which specializes in reptiles. This gave Toothless an overbite appearance and made swallowing food difficult for her. When she underwent an x-ray, they discovered that Toothless broke her jawbone while eating, hence the overbite.

However, instead of the risky surgery, the veterinarians looked to more “human” treatment methods and invented special braces for Toothless to correct the jawbone injury and overbite.

It worked, by the way, and Toothless regained her confidence once more since she was able to show her pearly whites… to her prey, without getting laughed at by them.

Additionally, Toothless did not go bankrupt since the procedure was not that expensive, unlike what happens to most humans who undergo extensive dental care.

The Michelle Obama Podcast was released on the 29th of July and can be streamed on Spotify, both for free and premium users. The world is currently hyped that the Former First Lady of the United States has released the first episode of her latest podcast. What made listeners even more excited was when she… END_OF_DOCUMENT_TOKEN_TO_BE_REPLACED

Research in Britain has deduced that there are a total of six “general” classifications of COVID-19 symptoms. The research, originally published in June of 2020, has revealed that the symptoms of COVID-19 can be generalized into six different categories. This is based on the data collected from a symptom tracking app. It has been widely proven… END_OF_DOCUMENT_TOKEN_TO_BE_REPLACED