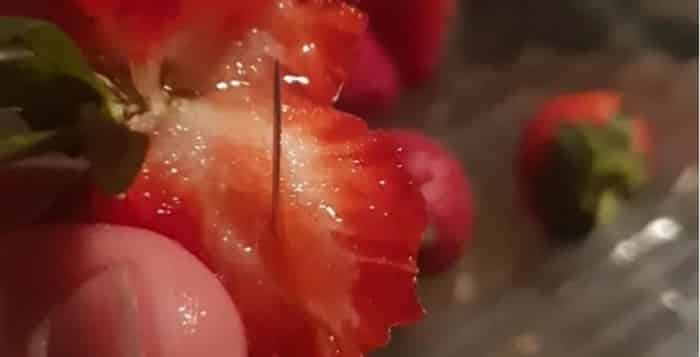 Australian police say they have found sewing needles hidden inside a banana and an apple, broadening a crisis which began with strawberries being recovered with hidden needles inside.

Officers say they have uncovered more than 25 instances of fruit with a concealed needle.

According to reports, hidden needles were discovered in a banana and an apple which were purchased in different districts of Sydney.

Thus far two people who inadvertently ate the needles have reported to the hospital, but fortuitously none sustained serious injury.

This image, displays a needle that was found in a box of strawberries:

People began detecting needles in their strawberries earlier this month after a man in Queensland, northeastern Australia, published a widespread post asserting that his friend unwittingly swallowed half a sewing needle while consuming strawberries, and had to be transported to hospital.

Via Facebook Joshua Gane said: “He bites through a strawberry and swallows half a sewing needle. We then checked the other strawberries and found another sewing needle lodged inside one of them. We are now at the ER [emergency room] because he subsequently started experiencing severe abdominal pain.”

As of Wednesday, all 6 Australian states have indicated cases and the total number of needle-fruit incidents is at 26 as of Wednesday morning.

It is still unclear how the needles managed to get inside the store-bought strawberries, and at which phase of the production procedure the fruits were contaminated. The Queensland Strawberry Growers Association said last week that the culprit could be one of its disgruntled former employees.

Snake Falls Out Of Banana Tree, Wraps Around Man’s Arm

The moment he was inaugurated, immediate changes made by Biden made headlines across the country. These are many of the controversial issues and topics that were shunned and ridiculed by the former administration. Americans can finally breathe a sigh of relief that these concerns have finally reached government policies. It seems clear that Biden has been… END_OF_DOCUMENT_TOKEN_TO_BE_REPLACED

Presidential pardons are one and many in the history of the US. There are many times when US Presidents granted reprieves for their citizen’s misdeeds. The US President may grant a pardon for any individual, including himself, for any crimes done against the country and its citizens. This issue of Presidential pardons has been trending… END_OF_DOCUMENT_TOKEN_TO_BE_REPLACED