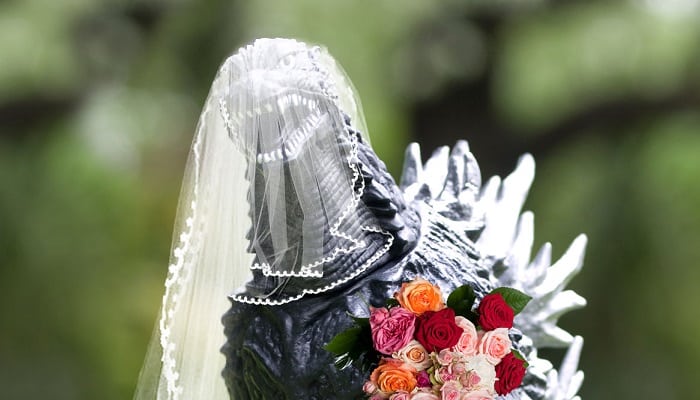 The internet thought it had finally found the ultimate bridezilla earlier this month, when a Canadian woman cancelled her wedding because guests refused to donate $1,500 each towards the bill.

Taking to Facebook to share the news, Susan explained how her $60K dream wedding in Aruba fell apart after guests declined to pony up the dough for the “once in a lifetime party.” Her relationship also broke down as a result, but after reading her entitled post, no one seemed to feel very sorry for her.

This is the best thing I’ve ever read. pic.twitter.com/tLQ4HEmpYA

Unbelievably, it looks like there’s a bride out there that can top that tale, except this one is getting everything she wants.

Appearing on British talk show This Morning, Sandra told hosts Holly Willoughby and Philip Schofield that she had been intent on having the perfect wedding, and that she wouldn’t let anybody stop her dream from becoming a reality.

“I wanted to have the perfect wedding,” she said. “I thought actually, I want it here but I also want it there and I want it there, so I thought why can’t I have it all?”

Her first two ceremonies took place in native Nigeria, including one in her father’s village. Her friends and family each paid £2,500 to be guests, with one taking out a loan that they’re still paying off.

“I wanted everyone there to celebrate an amazing day of my life and I wanted them to come to the village.

“I wanted them to be involved, and yes obviously money was a factor.”

The other locations included a beach wedding, a registery office in Coventry, UK, and a blow out bash at the luxurious Grosvenor House in London.

When host Holly asked if she felt guilty asking her loved ones for so much money and putting them through so many different ceremonies, Igwe replied: “I would have done the same. I have done the same, so yeah I think it is completely fine.”

Guests were also expected to adhere to the bride’s demands, including only wearing blue and silver and clearing the dance floor when she was on it: “I’m Nigerian, when you come out into the dance floor it’s all eyes on you.

“So yes, I needed the dance floor for myself and also for my husband to dance the night away.”

Pair Places Baby In Adoption — 36 Years Later Pops Up At Their Wedding!

The world is currently crippled by a global health pandemic. However, more and more catastrophes seem to be continuously tormenting the world. Threats of a recession, unemployment, and illness do not seem to be enough punishment for mankind. Explosions, threats of war, and accidents are happening. What is worse is that there are natural calamities… END_OF_DOCUMENT_TOKEN_TO_BE_REPLACED

The Michelle Obama Podcast was released on the 29th of July and can be streamed on Spotify, both for free and premium users. The world is currently hyped that the Former First Lady of the United States has released the first episode of her latest podcast. What made listeners even more excited was when she… END_OF_DOCUMENT_TOKEN_TO_BE_REPLACED