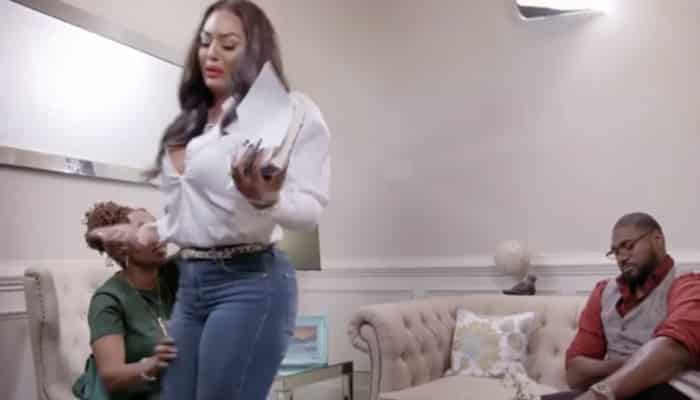 One single act of unfaithfulness in a relationship can be enough to devastate a person and demolish an otherwise solidified bond.

But how about finding out your partner has cheated with more than 25 other people?

Better yet … what if your partner has cheated with more than 300 people? Sounds unrealistic right — however — it’s more than a reality for one woman from Dallas.

Brandi Maxiell, after growing up as childhood sweethearts, married retired basketball player Jason Maxiell in 2010, after 17 years united. They too have a 6-year-old son together.

The pair appeared on Iyanla: Fix My Life recently in a bid to save their nascent marriage with Brandi implying her husband has a “drinking problem” and revealing that Jason has had eight affairs during the course of their eight years of marriage.

At the prodding of the show’s host, life coach Iyanla Vanzant, Jason discloses he’s had sex with more than 50 women during his marriage.

Brandi, his wife, calls her husband’s behavior “disgusting” and understandably storms out the room after breaking down in tears.

In a separate interview, the former Charlotte Hornets power forward shockingly confesses that he’s actually slept with a grand total of 341 women in his lifetime but inserts that he’s not a sex addict.

“At the time it was easy to do, to be pleasured that way. And I don’t know if I was looking for something else in it or trying to receive something else through it but I did do it,” said Jason.

Brandi spoke: “I would like to say I’m more frustrated with him blurting out a number to the world without no regard for my feelings. Eight put a damper on our relationship and I was willing to work on it. Over 50 tore it down!”

Intriguingly, the couple still appears to still be married as an IG post shared by Brandi last month celebrated their 9 year anniversary.

‘Candyman’ Travers Beynon On Strict Rules When It Comes To Girlfriends

Presidential pardons are one and many in the history of the US. There are many times when US Presidents granted reprieves for their citizen’s misdeeds. The US President may grant a pardon for any individual, including himself, for any crimes done against the country and its citizens. This issue of Presidential pardons has been trending… END_OF_DOCUMENT_TOKEN_TO_BE_REPLACED

President Biden has tapped Rachel Levine to be his assistant secretary of health, making her the first publicly transgender federal official. In 2017, Democratic Gov. Tom Wolf appointed Levine to her current post, making her one of the few transgender persons serving in appointed or elected positions countrywide. Biden said in a statement: “Dr. Rachel… END_OF_DOCUMENT_TOKEN_TO_BE_REPLACED

The minimum wage hike has always been an issue in the US for the past decades. With only a few hours before Biden gets inaugurated as the President of the United States, people are excited for all his promises to take place. One of these is his plans to raise the minimum wage of workers… END_OF_DOCUMENT_TOKEN_TO_BE_REPLACED