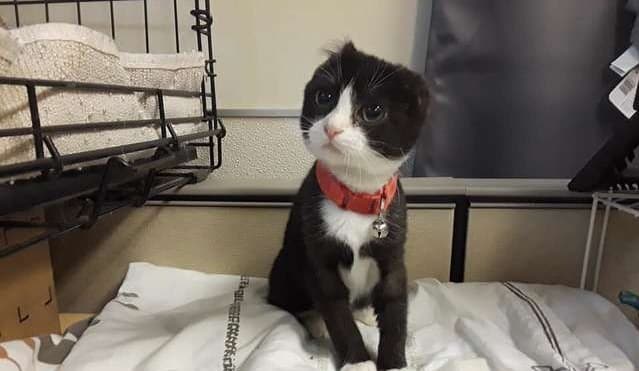 Taking your rage, psychotic or otherwise, on an innocent animal is never a good thing or even acceptable in society. After all, a nation’s or society’s greatness should be measured by how it treats its weakest members, according to one Hindu Indian pacifist. So you can imagine what a society is like whose members abuse animals just because they can. Unfortunately, we have yet again another victim of a backward society, this time a kitten.

One kitten in California, U.S., has been brought into the Humane Society Silicon Valley after being rescued. She was unlike any other kittens since her ears and tail are nonexistent. Not because she had a birth defect, but because someone cut them off. It is not uncommon to hear animals being abused, but those are mostly adult animals, someone who has the gall to abuse a baby animal would have to be quite disturbed.

Remember Karma, our earless kitten who received a pair of knitted ears from awesome foster volunteer Carla? This week she was featured on Love Meow! Read the story if you’re in need of some “awwww” (link in our bio!). . . . . . #kittens #kittensofinstagram #earlesskitten #volunteers #fosteringsaveslives

Because of this, the kitten was aptly named Karma, after the struggles she went through. As a result of her injuries, she also was shy and scared of humans. However, having her ears mutilated at such a young age did not stop Karma from being a lovable creature. She quickly adjusted to the shelter and became a favorite. More so after her foster mom knitted some fake ears for her as a replacement. This is what she looks like now:

As for the waste of skin who cut off Karma’s ears, whoever it was remains a mystery. Karma’s ear wounds have actually nearly healed when the shelter first encountered her, meaning it had already been a while after her ears got cut off. Here’s hoping that the perpetrator gets what he/she is due, or as what they call in Hinduism, Karma.

This Maine Coon Kitten Probably Looks More Human Than You Do

Will Smith disclosed in a podcast interview recently that he would “consider” running for president “at some point.” In an interview released Monday, the 52-year-old rapper told Crooked Media’s “Pod Save America”: “I think for now I’ll let that office get cleaned up a little bit. And then I’ll consider that at some point down… END_OF_DOCUMENT_TOKEN_TO_BE_REPLACED

Vaccination programs are currently on roll-out and countries that vaccinated for COVID-19 are talking. Questions are everywhere, and it is building up people’s anxieties about vaccination. How has the vaccine affected their population? Are the vaccines any good? Should we research more on newer vaccines? Can the vaccines kill the mutated virus? The answers change… END_OF_DOCUMENT_TOKEN_TO_BE_REPLACED

Texas Senator, Ted Cruz, received heavy criticism after taking a vacation to Cancun with his family in the middle of a crisis. The latest power crisis in Texas left hundreds of homes without electricity and water for more than 48 hours in negative degree weather. This has left the lives of many Texas residents in… END_OF_DOCUMENT_TOKEN_TO_BE_REPLACED