Everything’s Golden: A Retriever Has Been Elected Mayor of a...

It’s an established fact that dogs are better than people, but if you need any evidence, the internet is full of it. Whether they’re pushing their handi-capped owner’s wheelchair, or helping other animals in their time of need (even their sworn enemy, cats), dogs are truly the purest creatures on Earth.

So, when it was announced today that the Californian town of Idyllwood had elected a golden retriever as their mayor, we could easily believe it.

Maximus Might Dog Mueller II certainly looks every inch the Government official in his assortment of ties, and even has his own vehicle for public appearances.

However, Max is not the only dog to have held such a prestigious position. His uncle, Maximus Might Dog Mueller I was the first to be elected six years ago.

The cat and dog mayoral race of 2012 was certainly a brutal one, and pitted 14 worthy candidates against each other. Unlike most elections, people paid $1 to vote for their potential politician, with the money raised donated to local animal shelters.

Max I came out on top, but sadly passed away a year later. Max II won the following election in 2013, when he was still only a puppy. 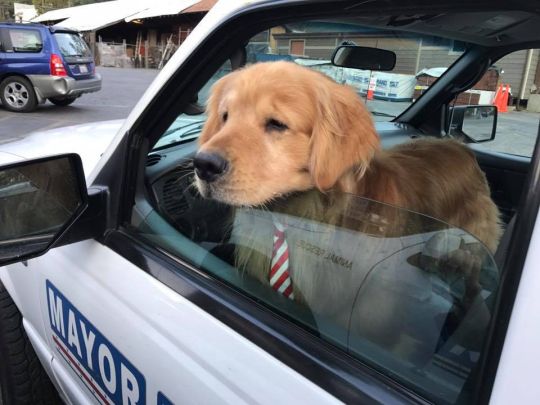 Phyllis Mueller, Max’s Chief of Staff (aka owner) told ABC News: “His role is to make the world a better place by conveying unconditional love and doing as many good deeds for others.”

You might be wondering, what are his qualifications for such a high pressure role? Well, science has already proven that dogs can detect whether someone is good or bad, which is more than most politicians can say. Although it sounds like Phyllis does most of the work anyway.

“My role as the chief of staff is to help run the vision of the mayor’s office for Idyllwild, so we actually run an actual mayor’s office,” she added.

Even if he is just a figurehead, Maximus seems like a very good boy, and the locals love him.

Andrea Valadez, who vacations in Idyllwood a few times a year, told KMIR TV: “Max is awesome. He is super friendly and he lets my son give him treats.”