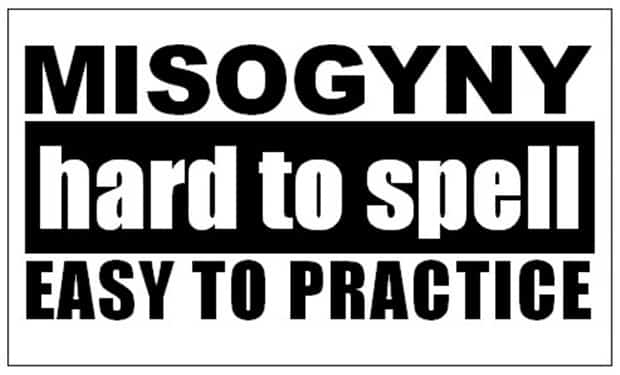 Misogyny tends to start developing in boys at a young age, but it can certainly be learned at a later time as well. Any Trump supporter could tell you that the hatred of women is a practiced art form, one that should be exercised each and every day. It takes time, effort, and dedicated commitment to expertly mold your craft before you can be considered a permanent member of The He-Mann Woman Haters Club, so it’s important to read these steps prior to signing up for any of our formal classes. Following the course book written by our humble leader, Mr. President Donald Trump, you will get in-depth insight into why boys rule and girls drool. To get started, simply apply these tips to your daily habits on how to be a misogynist, inspired by our chosen leader.

Always Talk Down To Them

Whether you’re speaking to the women in your family or your female colleagues at work, it’s important to make sure that they know they are inferior to you. This can be done by downplaying their intelligence, belittling their opinions, and putting emphasis on their weaknesses. Remember, a woman can never be as strong as a man nor do they have the same size brains as us guys do, so finding things to rag on them about should be quite easy.

Interrupt Them Any Chance You Get

It’s essential that women never get the opportunity to get out an entire thought when you’re around. This ensures that they’re reminded of their place in the world, which is always second to men. It tells them that their thoughts and opinions don’t matter as much as ours. Do this by speaking over them, putting your hand up in front of their face when they begin speaking or directing the conversation elsewhere.

If They’re A Dog Make Sure They Know It

A woman’s worth is directly related to her level of beauty, and nothing more. Neither her intelligence or personality matter and it’s important that they know that. If they get a new haircut that makes their face look fat, tell them! If they wear a dress that’s too tight and they don’t have a Barbi doll body, tell them! How will they know that they need to make changes if they aren’t told these things?

Call Them Out For Being On The Rag

If a woman is acting out, the fastest way to put her in her place is to accuse her of being on the rag. Most likely she is, and we all know how these ladies are when Aunt Flow comes to town. You just can’t reason with them! Offer her a tampon or suggest she take a few days off so that her emotions don’t get in the way of making important decisions. Especially when a woman is in charge of answering phones or making coffee in the office, you want to make sure she’s at her best. And she can’t be at her best on her rag.

Women are objects for us to ogle at. They go about their business until we desire their company or require them to sexually please us. Their job is to support us in our careers and care for our homes and children until we’re in need of companionship. Too often women will get it into their heads that these are not their roles in our society, and occasionally we may appease them in order to get them to stop complaining, but it’s essential that these roles are ultimately obeyed. They’re the foundation of civilization and ensure order and harmony among us all.

Never Allow Them To Be Better Than You At Anything

Women should never be able to beat you at anything. Whether you’re competing for a promotion at work or for beer pong champion at your next family reunion, you need to always be the winner. You are the alpha male, and anything a woman does is automatically lesser than you. Do whatever you can to win. Take credit for their ideas or work in the office. Play dirty and cheat. Reduce their confidence with smack talk and psych them out right before a big presentation. These are the kinds of habits that might require an ample amount of effort at first but will come naturally in time.

Monogamy is for women and second-class men. Alpha men are never monogamous. While it’s important to have a wife to care for your bloodline as well as your home, they shouldn’t expect you not to appreciate the beauty of other women. As we already know, that’s what we keep them around for. Since we work much harder than any woman, we deserve to blow off some steam with another beautiful woman every now and then. However, if our wives manage to find time to be with another man, then she is clearly not fully applying herself to her role in the family. It may be a sign that it’s time to reproduce again or give her a project to occupy her time. This project can be anything from redecorating a room in the house to implying she’s gaining weight and getting her to focus on a strict workout routine. Anything that will keep her occupied while you’re focused on bedding the women you meet through work.

Having a wardrobe with a few misogynistic themed t-shirts and accessories will not only help to spread this traditional way of living, but it will also help you to connect with other like-minded men. When learning misogyny, spending time with other misogynists will help you to learn our ways faster than those who only take our formal classes. Additionally, you’ll want to make sure the world knows that you’re an alpha male and that you have certain expectations from the women in your life. This alone will ensure most of the women in your life behave properly.

After you’ve developed these habits at a beginner level, you just might be ready to for our formal course! Sign up today by following this link, and you’ll be on your way to becoming a misogynist even Trump would be proud of!

The US arms sale industry is large and successful. More than 30% of exported weapons in the world come from the United States. They supply to no less than 90 nations making it one of the largest suppliers of weapons in the world. The US makes an estimate of almost 200 Billion dollars in annual… END_OF_DOCUMENT_TOKEN_TO_BE_REPLACED

Now that the election results are almost final, we all want to ask what’s going to happen to Donald Trump after leaving the office? All US Presidents inevitably reach the point where they leave the White House.  Besides, the constitution states that all US Presidents are subject to a two-term limit. What do former presidents… END_OF_DOCUMENT_TOKEN_TO_BE_REPLACED

This is the first time in modern history that the US held presidential elections in the middle of a pandemic. In truth, the US elections may have overshadowed COVID-19 and the side effects are limitless. America is facing a tough crisis of discontentment with the current administration. An understandable case but a situation that may… END_OF_DOCUMENT_TOKEN_TO_BE_REPLACED