Despite the forecast that Hurricane Florence will be the size of North Carolina when it hits the East Coast later this week, American’s are apparently more than willing to take the storm on.

How, do you ask? With guns, of course!

It turns out that predicted winds of 130mph and a Category 5 classification are not enough to deter gun nuts, who hope to use their weapons to “scare the storm away.”

One Facebook event, aptly titled ‘Shooting Guns At Hurricane Florence To Scare It Away,’ asks people to “get their guns and umbrellas” to protect the US from “this foreign invader.”

Taking place today in Richmond, Virginia, at 1pm, over 20,000 people have clicked “attend.”

The event’s blurb says: “Get your guns and your umbrellas. 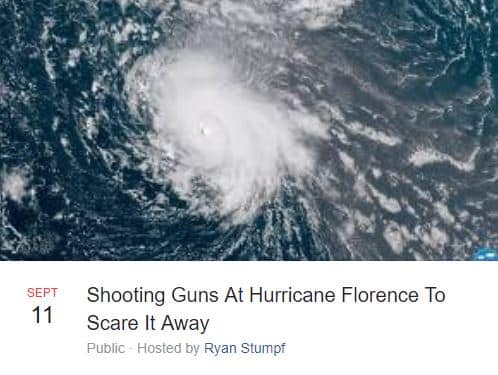 Luckily, the whole thing seems to be in jest, with a disclaimer at the bottom of the text reading:

“Note: do not actually discharge firearms into the air.

“You could kill someone and you cannot frighten a hurricane. I cant believe I actually have to write this.”

However, this is not the first time someone has jokingly threatened to shoot a hurricane. When Hurricane Irma was on the warpath in 2017, a series of social media events suggested people get together to shoot the storm.

The joke events were funny, until it went too far and the Pasco Sheriff’s Office had to get involved, taking to Twitter to reming people that firing their guns at Irma was a bad idea.

To clarify, DO NOT shoot weapons @ #Irma. You won’t make it turn around & it will have very dangerous side effectshttps://t.co/CV4Y9OJknv