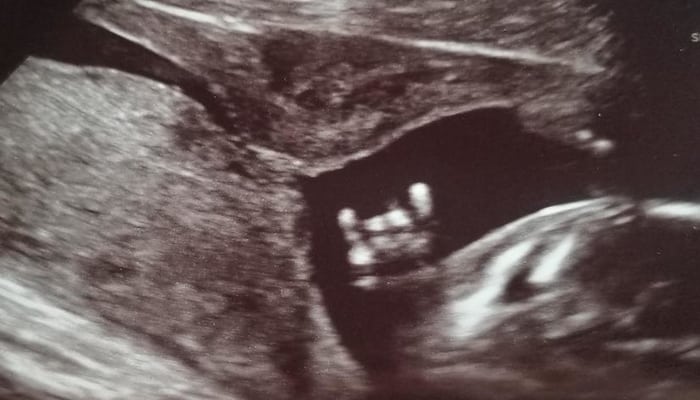 A couple of Texas A&M graduates were left thunderstruck when a sonogram image displayed their expected child throwing up the ‘sign of the horns’ — within the womb.

Samantha Perkins expressed she and her husband are both graduates and dedicated fans of Texas A&M University, however during their last sonogram appointment the tech asked if they were University of Texas Longhorn fans.

“My husband and I just looked at each other,” Perkins told local news reporters.

The fetus was flashing an UT “Hook ’em Horns” sign.

Perkins stated she and her spouse already have some Texas A&M apparel primed for the baby, who is due in January, and they are preparing to attend an upcoming game.

This WILL Make Your Day: A Baby and a Goat Having A Discussion

Presidential pardons are one and many in the history of the US. There are many times when US Presidents granted reprieves for their citizen’s misdeeds. The US President may grant a pardon for any individual, including himself, for any crimes done against the country and its citizens. This issue of Presidential pardons has been trending… END_OF_DOCUMENT_TOKEN_TO_BE_REPLACED

President Biden has tapped Rachel Levine to be his assistant secretary of health, making her the first publicly transgender federal official. In 2017, Democratic Gov. Tom Wolf appointed Levine to her current post, making her one of the few transgender persons serving in appointed or elected positions countrywide. Biden said in a statement: “Dr. Rachel… END_OF_DOCUMENT_TOKEN_TO_BE_REPLACED

The minimum wage hike has always been an issue in the US for the past decades. With only a few hours before Biden gets inaugurated as the President of the United States, people are excited for all his promises to take place. One of these is his plans to raise the minimum wage of workers… END_OF_DOCUMENT_TOKEN_TO_BE_REPLACED