Twitter’s Vine App Is Just Like Vigi, Which Has Been...

Twitter’s Vine app, which allows users to loop tiny clips of video together into six-second video clips, debuted last week and quickly climbed the charts to the No. 14 spot of popular free applications. It’s a great app. It’s just a bit redundant. An app called Vigi (created by Enkoshii) does pretty much the same thing, and has been in the App Store since November of last year.

One of Vigi’s co-creators reached out to us prior to the Vine debut, explaining that the product description closely matches that of their own app, which has been available for several months.

Vigi is a format built on the concept of mini video loops, just like Vine. The reason you probably never heard of it is obvious: The developers don’t have the launch and exposure power of Twitter, and they failed to get any real media exposure at the time of their debut. They do, however, have a modest community of dedicated users.

Their spokesperson says that work on their own video looping app started at the beginning of 2012. They came up with their idea, and started working it out sometime in March. By April, they had their first build ready. Several months later, the Vigi app itself was made available on November 18. Various screenshots and documents they provided me with (some of which are in the gallery below) corroborate their story.

By our count, Vine was aggressively acquired by Twitter’s own Jack Dorsey in October of last year, but at that time, Vine was nothing. The reason Twitter’s acquisition of Vine was a story in October is because it came amidst rumors of Dorsey’s shrinking power at Twitter, an idea that was seemingly contradicted by Dorsey’s pushed acquisition of the then-unknown app. After all, how did he have the power to take such a risk on a start-up that hadn’t even debuted a product yet?

Meanwhile, weeks later, Vigi goes live on the App Store. The proof, as they say, is in the pudding: 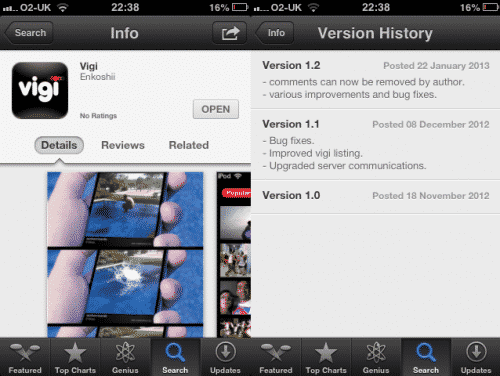 Then there are a few minor articles about Vigi’s debut from late December: One at Trendhunter, and another at Design Collector.

So what are we trying to say here? That Twitter’s Vine is an injustice that must be stopped? That Vine as a start-up ripped off the guys at Vigi and sold out to a big fish for a bigger pay day?

Absolutely not. Niether we, nor Vigi’s creators are claiming anything of the sort.

Instead, in the words of Enkoshii’s Senhor Ricardo:

“We’d just like a fighting chance against a colossus like Twitter, which managed to release a service that broke down on its users upon launch, and still get instant #1 exposure in the App Store in 16 different countries. Users must at least know other things are out there, things that actually care if their service runs well and customers are instantly using it rather than thinking about why it doesn’t work – even if they are made by three people only.”

Vigi videos can be shared on Facebook, Twitter, and other social media without any problems (while Vine is already having problems playing nice with Facebook). Vigi’s social approach is different, since it’s more focused on users modifying each others’ videos themselves and communicating in a totally new way. “But we believe being different should be a good thing,” says Ricardo.

So we’re saying this: Download Vigi here and Vine here (they’re both free) and try them out for yourself. As always, we’re here to give you as much of the story we can get our hands on and leave you to decide for yourselves.

Here’s the demo video for Vigi, as well as a few images of their build and product history: