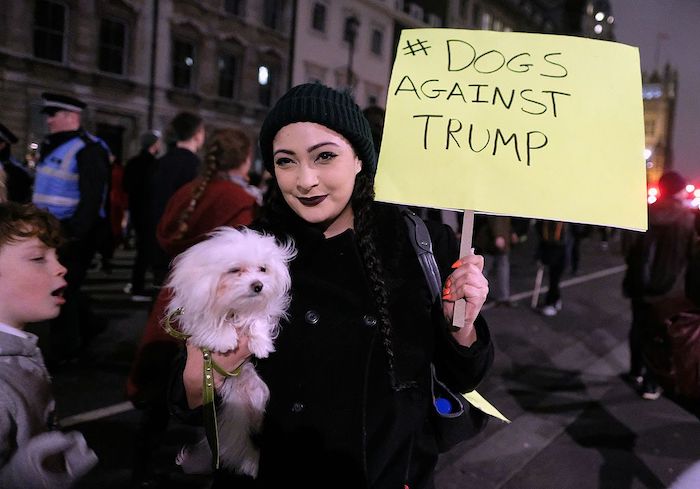 It goes without saying that running around making umbrella statements about people isn’t the best way to conduct yourself. You could actually make the argument that broad generalizations based on a lack of evidence (and the people who make them) are one of the most significant issues facing society as a whole. That’s clear.

That said, if you hate dogs, you suck as a person. How can you hate a dog? They want so desperately to love you. Plus, they’re constantly trying to achieve that goal with a parade of adorable, enthusiastic, derpy antics.

Of course, you’re thinking that there are extenuating circumstances. What if someone gets bitten, doesn’t that entitle them to a little slice of hatred? No. No, it doesn’t. Suck it up. Bad dogs don’t exist. Bad owners, on the other hand …

Which brings us to the sitting President of the United States, some fella named Donald John. As it happens, several instances indicate old Donny J absolutely hates mutts. Shocking, I know. At least, the revelation that Trump hates dogs is shocking … provided you know nothing else about the man.

Trump and His Big Mouth

In mid-August, D-Town got in hot water for opening his big, stupid mouth on Twitter (again). Following some bad press from former employee Omarosa Manigault, Trump loaded up his Twitter canon and got to work, using his favorite insult: dog.

This is far from the first time Trump has called someone a dog. He repeatedly refers to his political opponents as dogs. Either they were “fired like dogs” (Glenn Beck) or they “choked like dogs” (Mitt Romney). In one instance he accused Marco Rubio of “sweating like a dog,” which is weird because dogs don’t sweat.

.@GlennBeck got fired like a dog by #Fox. The Blaze is failing and he wanted to have me on his show. I said no – because he is irrelevant.

Hell, the guy even took time to call K-Stew a dog when she cheated on that ghostly British boy.

Robert Pattinson should not take back Kristen Stewart. She cheated on him like a dog & will do it again–just watch. He can do much better!

In 2017’s Raising Trump, former T-wife Ivana explained that the Donald hated dogs so much that when she brought home a poodle, he insisted that she get rid of it. Only through (ahem) dogged persistence did Donald Trump dog-hater relent.

Even after the dog was allowed in the family, however, it barked at Donald every time he tried to enter Ivana’s closet.

Trump Was Offered a Hand-Picked Pooch

Whenever a new occupant moves into the White House, the tradition is that they get a family pet. It’s fun for the kids, it humanizes the president, and a cute pup is a great distraction for the public while the Prez busy bombing some impoverished nation.

In fact, every single president has had a family pup. The last occupant of the White House who didn’t have a pup was William McKinley (circa 1900). McKinley still had pets, though; he was a bird guy. He kept roosters, and he had a parrot named Washington Post. He also had two Angora kittens with the undeniably peculiar names Valeriano Weyler and Enrique DeLome.

So, it was n’t so much that McKinley didn’t have pets, it was that dogs weren’t adorable enough for him. D-Town, however, can’t have some fluffy ass hat stealing his thunder.

That’s why, when a family friend conducted an exhaustive search for the right dog to live in the White House, Trump never responded. Lois Pope searched high and low for an excellent dog for the Donald. She eventually landed on a perky little goldendoodle. She eventually named the dog Patton after Trump’s favorite general — because, of course, Trump’s favorite American general was a guy who was formally reprimanded for repeatedly slapping a soldier with PTSD.

To prep for the rest of this story, you need to know that Patton looks like this:

Okay, so Pope procured Patton and then showed the dog to Trump, who redirected her to Barron. Of course, Trump’s son fell in love with the furry little bastard, because he’s a 12-year-old boy and Patton looks like a stuffed animal come to life.

Then Trump’s people failed to follow up with Pope. Patton now lives with Pope herself, because obviously, he does. Who would let that jerk out of their site once he was in their possession?

Does Hating Dogs Really Make You a Bad Person?

At the very least, his lack of sentimentality toward animals hints at a lack of regard for the environment. According to domestic animal researcher John Bradshaw, “Recent studies have shown that affection for pets goes hand-in-hand with concern for the natural world.”

Of course, you could have asked any environmentalist in the United States how the Trump administration felt about Mother Nature and gotten a similar response.

Okay, in all honesty, obviously not everyone loves dogs. Some people are just wired that way, and — shockingly — they manage to possess a normal human level of empathy while also not necessarily liking pets.

That’s not the case for Donald Trump dog-hater. His disdain for furry critters totally counts against him.

Will Smith disclosed in a podcast interview recently that he would “consider” running for president “at some point.” In an interview released Monday, the 52-year-old rapper told Crooked Media’s “Pod Save America”: “I think for now I’ll let that office get cleaned up a little bit. And then I’ll consider that at some point down… END_OF_DOCUMENT_TOKEN_TO_BE_REPLACED

Vaccination programs are currently on roll-out and countries that vaccinated for COVID-19 are talking. Questions are everywhere, and it is building up people’s anxieties about vaccination. How has the vaccine affected their population? Are the vaccines any good? Should we research more on newer vaccines? Can the vaccines kill the mutated virus? The answers change… END_OF_DOCUMENT_TOKEN_TO_BE_REPLACED

Texas Senator, Ted Cruz, received heavy criticism after taking a vacation to Cancun with his family in the middle of a crisis. The latest power crisis in Texas left hundreds of homes without electricity and water for more than 48 hours in negative degree weather. This has left the lives of many Texas residents in… END_OF_DOCUMENT_TOKEN_TO_BE_REPLACED