72-Year-Old Millionaire on the Hunt for Wife to “Knock Out...

It’s what every little girl dreams of – marrying a rich man with ridiculous expectations, who wants you to “knock out a couple of heirs” for him. Oh wait, no it isn’t.

Still, that’s the kind of woman British multi-millionaire Sir Benjamin Slade is hoping to find. The 72-year-old has been searching for a young “wife” for the last six years, but has not had much luck in landing a new missus. This is most likely due to the businessman’s strict requirements, which state that any potential match needs to have both a helicopter and gun license, be 5ft 6 or smaller, under 40 years of age, and willing to start a family asap.

Nevertheless, Slade hasn’t given up hope, even going to British talk show Good Morning to raise awareness of his on-going hunt for Mrs Right. 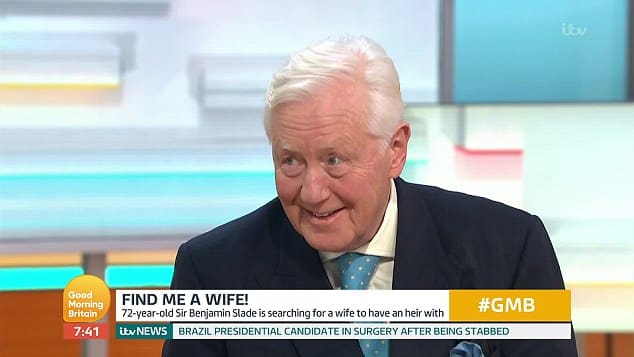 In an interview with hosts Kate Garraway and Ben Shepherd, the arsitocrat explained why he’s in need of a wife, rather than a new business partner, to help manage his homelife.

“And she runs off and all the rest of it because she’s got other ambitions.

The “wife” will receive a £50,000 (roughly $65,000) salary per year, plus bonuses. She will live on Slade’s Somerset 13th century estate, which regularly hosts a range of events including weddings, parties, and even acts as a bed and breakfast. His wife would be expected to take over the running of the venue, and so needs to be “castle-trained.”

But as his search has not gone as well as he hoped, Slade has recently begun to change his tack.

“I have changed my spiel, I now say I want romance, I want to give you my credit card so you can shop until you drop,” he said. 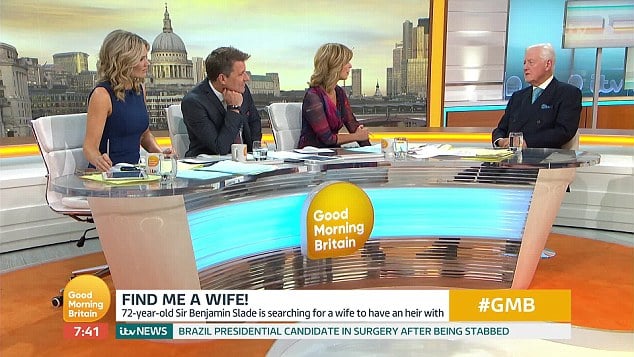 Yet host Garraway was not impressed with Slade’s search, which she compared to treating women like a “cattle market.”

To which Slade replied: “Well hang on a sec. I’m a bit of meat on the auction block aren’t I?”

Surprisingly, Slade has found women willing to sign on the dotted line. That is, until the issue of children come up.

When asked about his desire to start a family in his 70s, he added: “‘It’s a deal isn’t it. Nobody wants to work forever. So you need to knock out a couple of heirs, in case one gets killed in battle right? And then they can take over.”

He continued: “I have been looking very hard and I’ve had lots of excitement in the last few years, we’re trying to close a deal. A lot of people just don’t want to have any more children though.

“I think it’s quite important to have a few children. I’ve never had a family so it’s about time I started, isn’t it?”

Romance Officially Dead, As Evidenced In A Single Tweet