It’s safe to say that while most politicians are dogs, not all of them can pull off the pout of a pug or the glare of a beagle. Even with Donald Trump’s hair and Vladimir Putin’s dead stare, these pups are just too adorable not to fall in love with. From Mussolini to Melania, these dogs hilariously resemble some of our history’s most recognized politicians.

Putin’s glare is quite unique, so to find a pup that resembles him is like finding a needle in a haystack. Aside from the short fur immitating a bald head and his lack of smile, there is something in this dog’s eyes that just screams Russian dictator. If humans and dogs could be related, these two would be brothers. Or at the very least, distant cousins.

Glam obviously comes as second nature to the Ivanka Pony Dog, with her long flowing hair and darling studded collar. It might take Ivanka a team of pros to look like she does, but this pedigree is clearly all natural. Pure bred, of course, and raised with class, Ivanka has nothing on this beauty. Not a pup, but a pup’s ear has gone viral for resembling our president. And it’s not even the cute, furry part of the ear but the hairless waxy inside. Poor pup has a Donald lump in his ear probably going on and on about all the haters and losers at the dog park, trying to get him to grab some bitches by the tail.

From her haircut to her iconic fashion, this doggy has got the Hillary Clinton look down pat. Of course, the glasses and collared shirt help the resemblance a bit, but even without the getup this dog exudes the Clinton persona for sure. Can’t you picture her behind the podium of the next presidential debate?

Don’t you just want to eat them both up? You would think that this look of sheer frustration and defeat would be easy to achieve, but it most certainly is not. It’s clear that this pup has a lot on his mind. He might not be watching as some Cheeto brained doofus undoes all of his hard work and effort that took eight years of his life to achieve, but maybe he missed his nap the day this picture was taken. Or, more likely, he was forced to have a playdate with a Chihuahua. 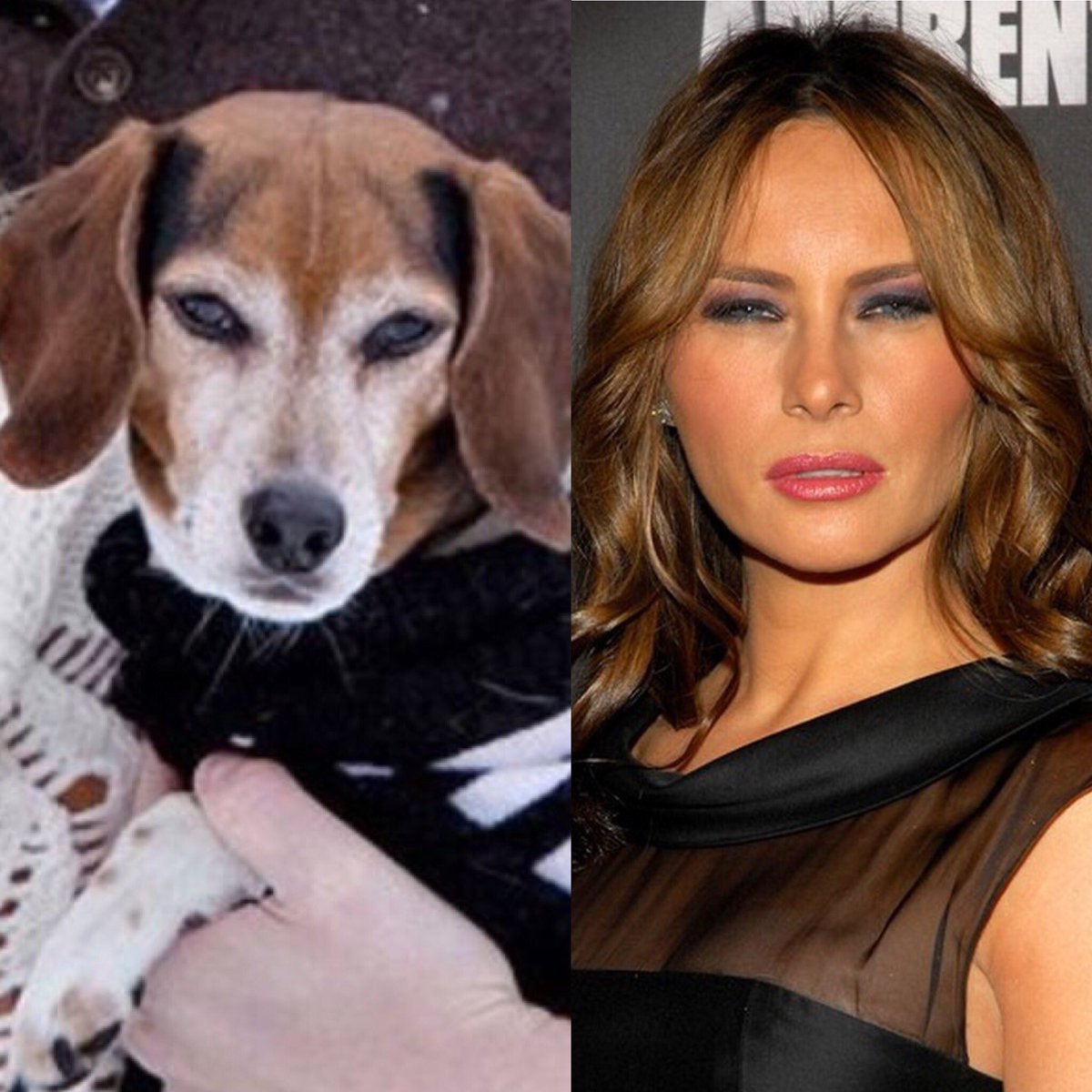 Melania’s death stare might be the result of years of practice in the modeling business (either that or it’s an unfortunate side effect of all that Botox), but few can mimic it. That is, until Melania Grump entered the scene. Her naturally lined blue eyes and sunken cheeckbones would give any of the Trumps a run for their money, making Melania’s look no match for this grumpy pup. Perhaps if we got these two in the same room together they’d scare Trump enough to send him running for the hills and out of the White House for good. 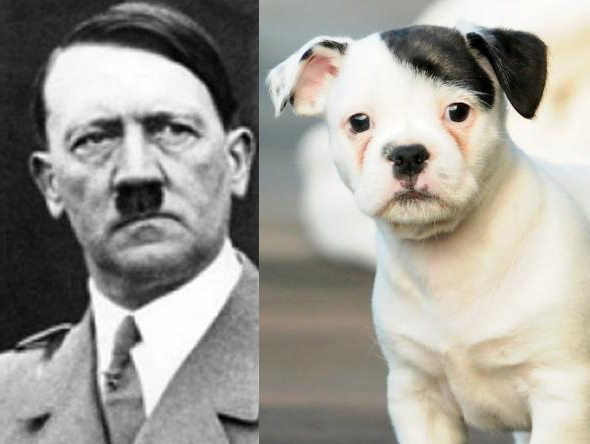 There’s literally no one on the planet who could make history’s most heinous leader’s iconic look adorable other than this pup right here. Adwoof Hitler’s furry marks are uncanny when compared to Hitler’s own swooped hair and rectangular mustache. That menacing look , however, is much harder for this puppy to mimic as he doesn’t want to risk losing dibs on belly rubs around his house. Hopefully, for this pups sake, he grows out of this resemblance because he’s far too cute to look like Hitler.

Likely this dog owners intentions were to give their pug a hairdo suitable for the king, but ended up with this hilarious mess instead. Far from looking like Elvis, at least we all get a laugh out of it at poor Pug Jong Un’s expense. Hopefully that hair isn’t permanent so Pug Jong Un can hang out with his crew at the dog park without facing what would likely be a humiliating outing.

The Pug Prince might not look exactly like Suharto, the President of Indonesia, but the two appear to share a love for bucket hats. President Suharto is all business while this poor pup looks like he’s patiently waiting for his owner to drop the camera and take the hat off his head already. He does exude a sense of royalty though! When Puppy Doc rocks his spectacles, he looks just like François “Papa Doc” Duvalier, former President of Haiti. The pup’s innocent sidewards glance lets others know he means business, a look that may have helped Papa Doc gain the support of his voters. Better keep your ladies close fellas, as a bowtie has never looked so good as it does on Puppy Doc. If he didn’t look so much like an old school politician he might pass for a modern day hipster pup. Pupito Mussolini appears serene as he looks out the window, assumingly down at all those who foolishly choose to be outside. Without an ounce of jealousy in his eyes, its safe to assume that this little guy enjoys his air conditioning. Perhaps it was a scene like this one that allowed Italian Dictator Benito Mussolini to come up with the concept of the fascist party. With stone cold glares alike, it’s easy to picture either of them starting out windows for extended periods of time, coming up with ways to conquer the world. Or in Pupito’s case, the dog park. 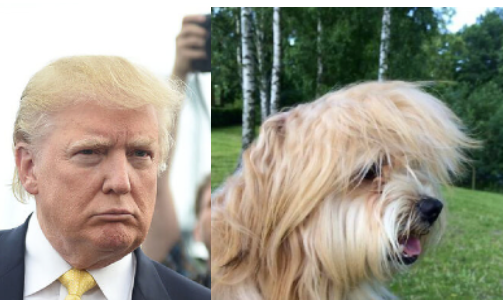