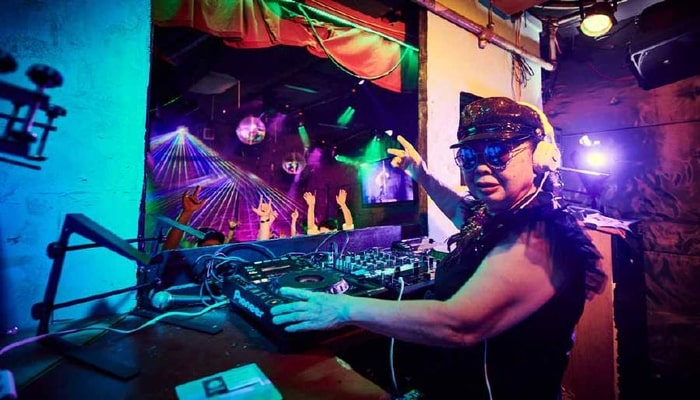 A Japanese woman eighty-three years of age has been declared by Guinness World Records as the world’s oldest professional club DJ.

83-year-old Sumiko Iwamura said she chose to attend a DJ school at the tender age of 77 and soon detected she had a talent for it.

Iwamura, who operates and works in a Chinese food restaurant kitchen, has a steady DJ slot at Decabar Z in Shinjuku, but her gifts have led to guest gigs at exotic locations including New Zealand and Paris.

She stated to Guinness World Records that DJ’ing isn’t much different from running her restaurant.

“You get feedback from your customers quickly in both cases,” she said. “If you’re playing tracks and they don’t like it, they’ll leave the floor and start drinking at the bar. If the tracks are danceable, then they’ll stay on and dance their heart out.”

“Restaurant customers are the same — if it tastes good, then they look happy, and they’ll tell me that they like it. For me, it’s easy to work out how people are feeling in both cases,” said Iwamura.

On November, 10 1951, Sir Hugh Beaver, the managing director of the Guinness Breweries at that time, went on a shooting party by the River Slaney (Ireland). After blowing a shot at a golden plover, he became engaged in a heated debate over which was the fastest game bird in Europe, the red grouse or the golden.

That evening, Beaver realized that it was totally unlikely to confirm in reference books whether or not the plover was Europe’s speediest game bird.

He knew that there must be numerous other questions debated daily and nightly, but there was no book in the world with which to settle arguments about records.

He figured then that a book delivering the answers to inquiries such as ‘which’s the fastest game bird’ might prove successful. Beaver’s notion became reality when Guinness employee Christopher Chataway suggested University friends Ross and Norris McWhirter. The twin brothers were enlisted to collate what became The Guinness Book of Records in August 1954. 1,000 copies were printed and handed out.

Gift-giving isn’t just a seasonal affair between friends, families and acquaintances. The art of gift-giving is also conducted on a national scale with countries often sending each other big, weird and expensive gifts. Experts in all things gifts, Vanilla Reindeer put together some examples of these expensive and odd gifts that have been shared between… END_OF_DOCUMENT_TOKEN_TO_BE_REPLACED

There are lots of ways you can make Pres. Trump feel welcome: you can offer him coffee, or mow a penis into a field for him to view as his plane lands. The willie in question has been chopped by Born Eco ahead of the arrival of President Trump, who visited the UK Monday for… END_OF_DOCUMENT_TOKEN_TO_BE_REPLACED

The year isn’t even halfway over, yet Donald Trump has managed to make a fool of himself and our country countless times. From inviting the national college football champions, the Clemson Tigers, all the way to the White House for some McDonald’s to his to the dreaded results of Mueller’s investigation, it has been one… END_OF_DOCUMENT_TOKEN_TO_BE_REPLACED

Republicans have always said that when they gained control in Congress, they would work to overturn Roe v. Wade and here they are, cashing in on that promise one state at a time. So far, Alabama, Arkansas, Georgia, Kentucky, Missouri, and Ohio have all passed incredibly restrictive laws on abortions, making it illegal for women… END_OF_DOCUMENT_TOKEN_TO_BE_REPLACED

If you’re on Snapchat, then you’ve probably played around with (and were likely horrified by) their filter gender swap filters. While you’re probably using these filters to send hilarious pics to your friends, some guys using them to create Tinder profiles. What likely started out as a joke has quickly evolved, and these guys are… END_OF_DOCUMENT_TOKEN_TO_BE_REPLACED

“Milkshaking” is a hilarious trend in Britain where a milkshake is thrown at and ideally lands on a far-right politician or activist. The point of this nonviolence protest is to humiliate them without causing injury. Physical injury at least. There’s no doubt that milkshaking has led to a few bruised egos. Not only is this… END_OF_DOCUMENT_TOKEN_TO_BE_REPLACED