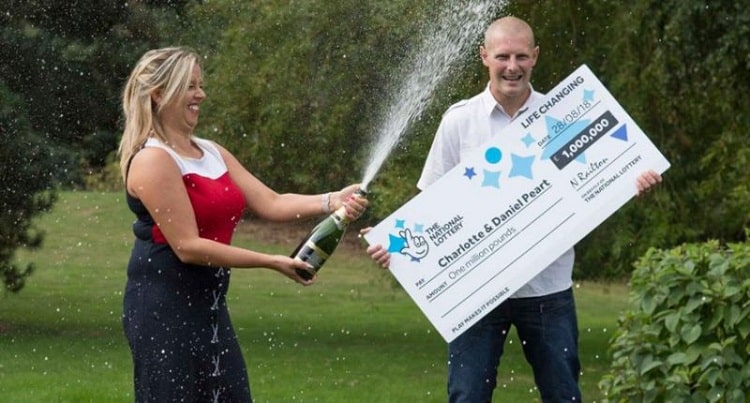 This is probably what makes gambling– err, lottery such a rush. The idea of winning everything overnight can bring about a certain ray of hope or ecstasy that is hard to match, or not, and you can keep buying tickets while helping some other lucky bastards achieve the fate you wanted. However, the universe seems to favor those who make a joke out of winning, you might want to try that.


You see, 28-year-old Charlotte Peart from the U.K. probably just wanted to prank her husband when she bought a lottery ticket. Initially, she joked to her husband, 27-year-old Daniel Peart, that she won £250,000 in the lottery, then the joke has been had and the couple had a good laugh. However, a few weeks after Charlotte did the prank, the ticket she bought matched the numbers from the EuroMillions HotPicks pot money draw. The jokes on her, she actually won £1,000,000, an amount 400 percent larger than what she pranked about. That’s them below:

Funny thing is Daniel, who thought that Charlotte was out to get him again, did not believe her at first. It was only until Charlotte sent him the screenshot of the lottery’s message that he believed her. Needless to say, they were stunned. The Pearts then set out to purchase a new and larger property as their first expenditure with the £1,000,000 winning.

“With a family of five, it gets a little cramped. All the kids have earned their own bedrooms, they’re all excited about that and we’re looking forward to the next adventure in our lives,” said Daniel. So the next time your purchase a lottery ticket, drop the prayers and make up some pranks or jokes about it.